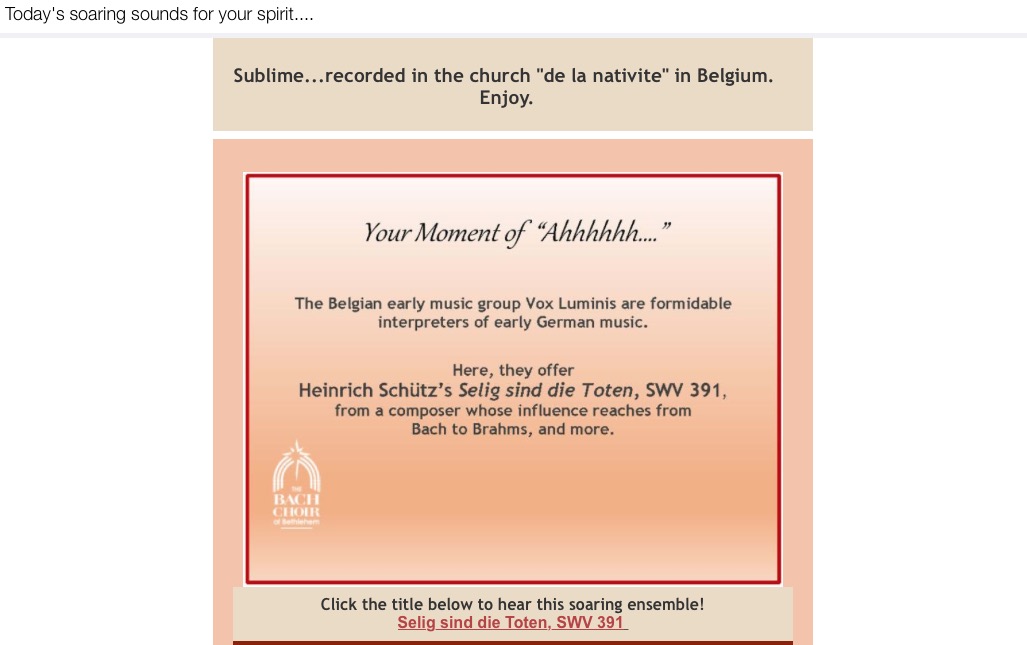 A couple  years ago, in the lead up to Christmas, it seemed almost every day that I would see a posts on Facebook, shared by many friends, that would begin something like this:

Five bearded men with varying levels of hair product (and a stetson!) begin singing in the special acoustics of an empty church, and what follows will blow your mind/bring you to tears/change your life forever!

The churl in me always wanted to comment, “They’re lip-synching (not well), it was clearly recorded in a studio. Also, there is more repertoire out there than Mary, Did you know, and Leonard Cohen’s masterwork, Hallelujah,” but such protestations were likely only to secure further social isolation.

When our fabulous new Marketing Director, the brilliant Renée James, and I met this summer to brainstorm some new initiatives, she suggested the possibility of offering something lovely on a weekly basis, without any purpose besides perhaps galvanizing community among our Facebook followers, something that would be a nice release, a kind of, as she put it, “Moment of Ahhhh.”  I’m all for this – I will often share such videos on my own Facebook page (they garner significantly fewer likes than the bearded and stetsoned gentlemen singing Mary, did you know…), and I thought that maybe the Bach audience might be more receptive to such sharing (and you have – I don’t have the stats on this week’s share, Schütz’s stunning Selig sind die Toten, a precursor to the Brahms Requiem, only a few centuries earlier, but previous weeks have had close to 200 link clicks).

Renée’s idea also resonated on a deeper level for me, for I worry that our media-saturated overstimulation has come at something of a cost to our listening skills.  The idea of pausing for a kind of mindful listening is a very attractive one, and we might get to experience an artist, a composer, or a work of which we were previously unaware.  Additionally, choral and early music groups gather daily in empty (and full) churches (and concert halls) across the world to make stunning, life-changing, mind-blowing music, and it’s entirely possible to be as thrilled by, say, Vox Luminis, as you are by Pentatonix. Ideally, both!  At least, we hope so.

I responded to Renée’s original suggestion with a different Moment of Ahhh for each week this fall, and put together another set for this winter and spring.  Many feature other groups, from other genres, some feature us, especially in the lead-up to our concerts.  My criterion for each of them is this:  is this work worth dropping whatever you’re doing for a few moments of aural beauty? Some of our followers have suggested their own Moments of Ahhh, which is a great idea (my choices will take us through May – I’m keeping a list of other suggestions to share over the summer).  You can also feel free to comment here or on the Facebook page with your own suggestions.  We live in trying times, I contend that it’s most important to take care of our own souls with a daily infusion of beauty – it can be art, poetry, literature, and, of course, music.  We’re happy to chip in, once a week, with our Moments of Ahhhh.  Do let us know if they help!

2 thoughts on “What’s the Deal with These Moments of Ahhhh?”