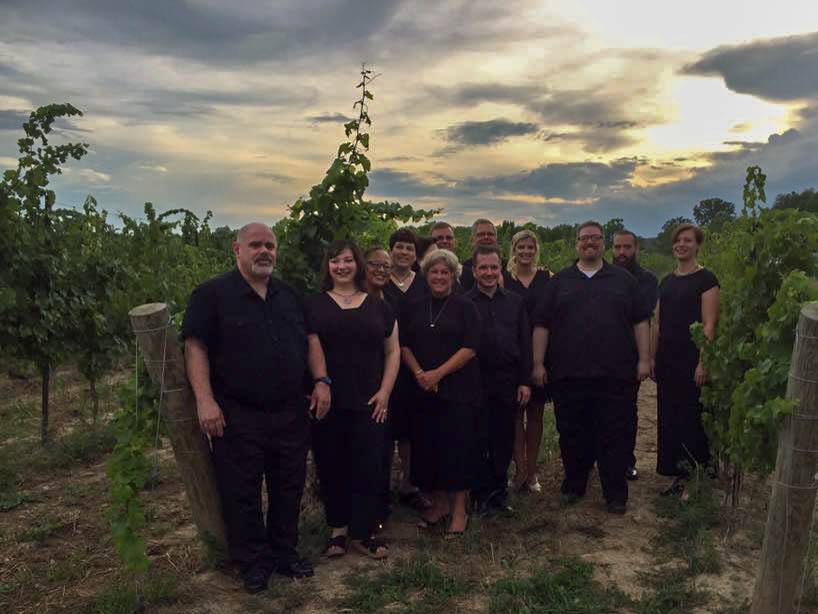 One of the great pleasures of this past summer was the opportunity to sing Warren Martin’s The True Story of Cinderella, at both our July Bach at Noon, and at the Hermann Wiemer Vineyards, in the Finger Lakes region of Upstate NY, in early August (the cast is pictured above among Wiemer’s riesling vines).  We’re going to be repeating the work in a special Valentine’s Day performance, this coming Tuesday, February 14th, at the Central Moravian Church in Bethlehem.  Please plan to arrive around 11:30 – seats will go fast!

Warren Martin thought of himself as a jack of all musical trades, and spent most of his professional life at Westminster Choir College, in Princeton, NJ, an institution he entered as an undergraduate at the age of 15.  He served several roles, there, including the head of the Graduate School, conductor, composer, singer, coach, and master pedagogue.  One year, for the College’s May Day celebration, he presented his comic oratorio, The True Story of Cinderella, to a somewhat astonished campus community.  His prodigious skills were well-known, however, there sheer pleasure and fun of Cinderella were unexpected from one of Westminster’s most frighteningly-talented musical savants.  With music in a broad range of operatic and musical theater styles, and a pun-y, delightful text that he wrote himself, performances of Cinderella are a time-honored tradition on the Westminster  campus, and alumni of the school have spread the gospel of this work throughout the country.  Our conductor, Greg Funfgeld, studied with Professor Martin, and is an eloquent advocate for this music (he will also serve as narrator for the performance).

Martin’s range of influences for the piece seems to extend from Baroque contrapuntalists (counterpoint is utilized in a trio during which Cinderella’s wicked step-siblings and step mother are preparing themselves for a ball) to Puccini, from early Disney composers to an uncanny prediction of some of Andrew Lloyd Webbers best melodies (the central love aria of the work sounds eerily like “The Music of the Night,” from Phantom – Warren was there first, though, this work dates from 1955).  The text is full of whimsy, puns, and much wordplay, and the vocal demands on the singers are quite formidable (except for the part I will be singing as the Royal Herald, a recurring joke peppered throughout the composition).  Perhaps the most challenging part of the whole enterprise, though, is the piano part, which requires a virtuoso player.  I have to say, over the years, I’ve seen many a pianist bang his or her way through, with varying degrees of success.  In our case, Tom Goeman has learned every note, extremely carefully, and meets all of the work’s considerable demands with panache and elegance, and just the right amount of wit.  One of the chief delights of these performances has been hearing my colleagues in the choir step out as soloists in genres far away from our usual baroque choral discipline.  You will hear heroic tenoring, beautiful bel canto, bossa nova, some rootin’, tootin’ duetting, and more.  We had such a hoot putting it together in some rollicking evening sessions at the Bachhaus over the summer, and are delighted to be bringing it back to life one more time!