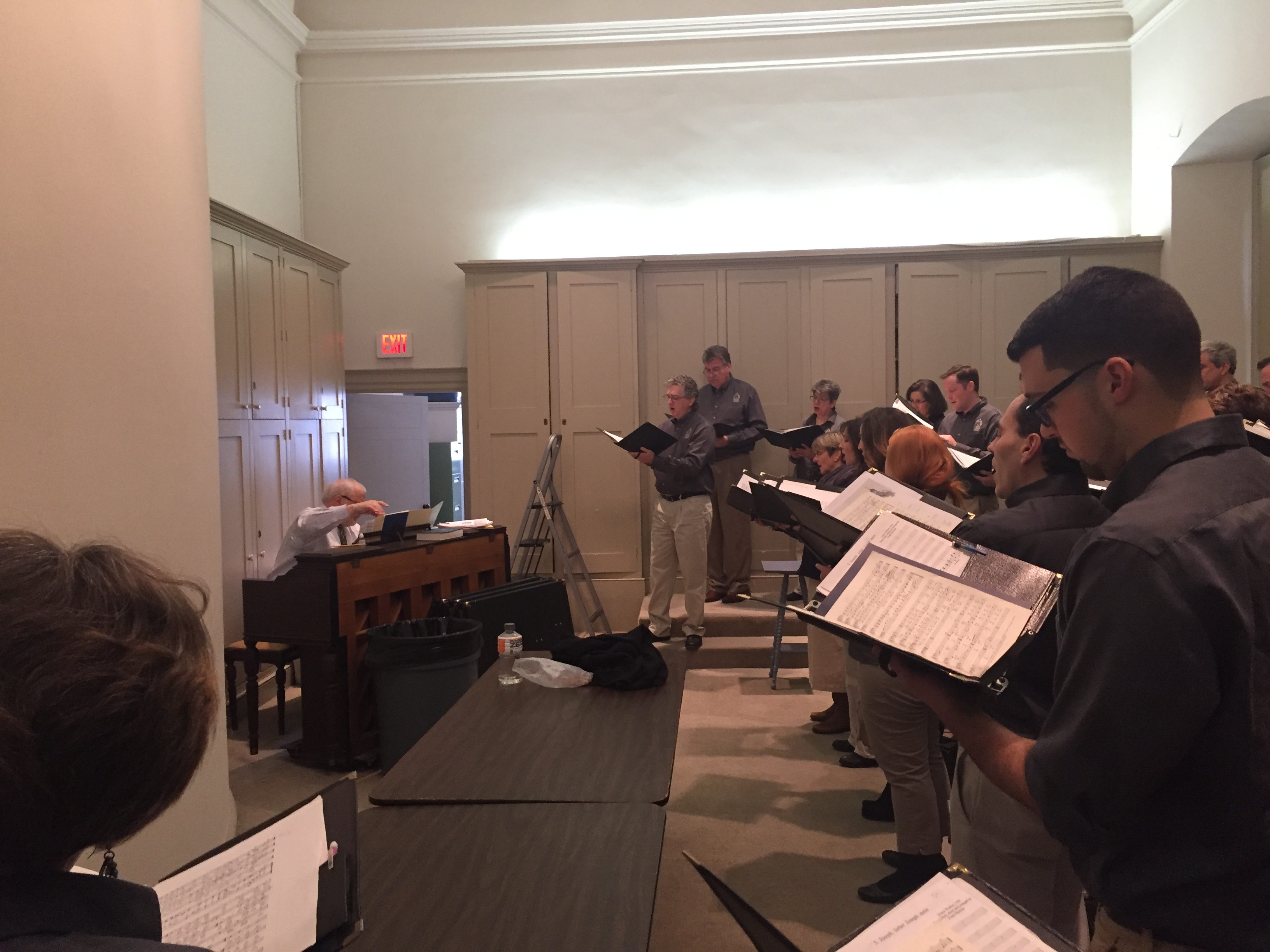 In my preview of this afternoon’s Bach at Noon, I mentioned being glad that we could experience some Christmas music that is short on the bombast that can sometimes overwhelm the season’s offerings (don’t get me wrong, I love it when there’s the opportunity to sing lustily).  Just as there are many textures and emotions in the Christmas narrative, our music should reflect that panoply of affects, and one of them, intimate joy, is one of my favorites.  I’m gratified that it seemed we delivered much of that, this afternoon.

The program began with Max Drischner’s Partita on Es ist ein Ros entsprungen, which Greg played in alternation with The Choir’s performance of three verses of Hugo Distler’s melancholic but ravishingly beautiful arrangement of the same tune.  In design, we seemed to morph from devout whimsy to something even deeper.  Distler’s harmonies and decorative part-writing seem to harken back to earlier music, and offer a portrait of multiple complexities, from the evanescent beauty of a birth that would ultimately result in the cross, to Distler’s own ambivalence about reconciling his faith with the increasingly hostile atmosphere of wartime Germany.  If this all sounds like a prescription for a downer, I can assure you, it was not.  These complexities contribute to the work’s ultimate humanity, and something as simple as a chorale arrangement can be a window to a wealth of emotions.  Also, Greg’s playing (offered on our Brunzema continuo instrument) was quite lovely.  Next, we offered Johann Walter’s Joseph, lieber Joseph, mein, without a pause between pieces, a work that bridged into a later work on the program, Brahms’ Sacred Lullaby.  Before that, however, Greg, Loretta O’Sullivan, our cellist, and Tricia van Oers, our recorder virtuoso extraordinare, offered a charming Pastorale from Nicholas Chédeville (who had tried to sell has own music as Antonio Vivaldi’s).  It’s a pity there’s all the intrigue – Chédeville’s music stands strongly on its own!  In any case, the Pastorale took us from  early 17th century Germany to a Frenchman’s notion of Italy (after hearing two 20th century German arrangements of a 16th century German chorale), to the Late Romantic Era Germany. Brahms’ Geistliches Wiegenlied (Sacred Lullaby) begins with the melody of Joseph, lieber, in the cello  and then expands on its themes in a lullaby intended as a wedding gift to expectant parents and friends.  Barbara Hollinshead, Loretta, and Greg (now at the piano) offered this achingly beautiful selection, another piece rife with emotional and theological complexity.  We don’t often hear this kind of music in the Valley, and I’m so glad we could share it with our Bach at Noon audience.

Then followed Bach’s shimmering Cantata No. 96, with Tricia dancing merrily away on the recorder part.  There were wonderful contributions from Christòpheren Nomura (whom we were delighted to welcome back to Bethlehem after a long absence), Charles Blandy, Barbara, and Katherine Kaiser, a member of the choir (with a PhD in musicology), who sounded fabulous.  Though it was cold and somewhat dreary outside, there was plenty of warmth (musical and otherwise) inside, and it was a distinct pleasure to perform this music for a near-capacity audience!

Greg also mentioned that it was our 85th Bach at Noon, a milestone for which we are simultaneously grateful and proud. Next month, something vastly different and full of much musical intrigue and hilarity, Warren Martin’s The True Story of Cinderella, a work that had them in stitches at one of our Allentown Bach at Noon performances from this past summer.  We also sang it at the Hermann Wiemer Vineyards in the Finger Lakes region, though I suspect that the copious sampling of Wiemer’s fine wines on the part of the audience may have contributed to their delight in the piece.  In any case, it promises to be a lot of fun, and a perfect selection for the day upon which it serendipitously falls, St. Valentine’s Day!