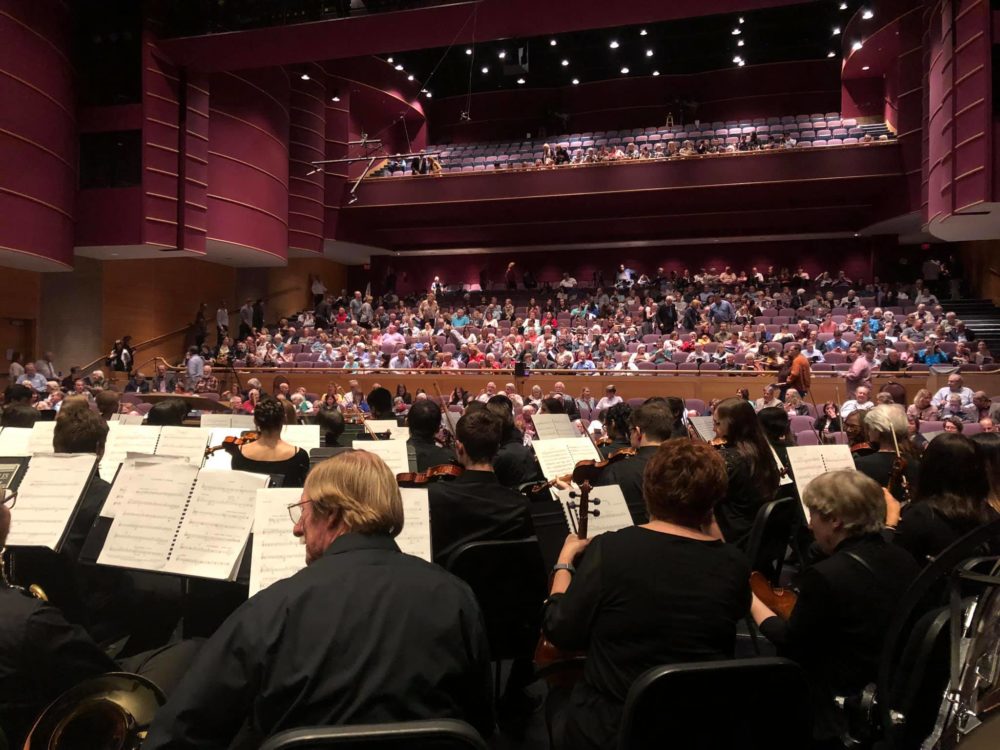 Confession:  I have long admired but perhaps not loved the Mozart Requiem.  I have several recordings, but very infrequently listen the whole way through – often I touch on the first three movements, and sometimes add the Confutatis to the mix, if the mood strikes.  Our two performances of the work over the weekend, however, definitely pushed the esteem-o-meter from admiration to love.  It helped, as always, to have Greg Funfgeld’s advocacy for the work – the process of learning the piece, in which we were engaged since the fall, was tremendously enjoyable and fairly painless.  Though often challenging, Mozart’s fugal writing often feels very intuitive, once you’ve understood his compositional intentions. The young voices of the Lehigh Valley Charter Arts Touring Choir added an additional dimension of enthusiasm to the endeavor.  I cannot imagine singing the Mozart Requiem at 17 (probably the average age of our youthful colleagues) and having had the opportunity to do so at that age would have possibly offered some redemption for those tumultuous adolescent years!  Finally, it was a thrill to see the transformation of the Lehigh University Philharmonic over the rehearsal and performance period.  This was a stretch piece for them, but they rose to the challenges with great bravery and skill.

The rest of the program was similarly engaging –  the Walton Coronation Te Deum with the full orchestration (I stood next to the cymbals and bass drum – emphasis on the word full) was akin to enjoying the very best scone bedecked with jam and clotted cream.  It’s an absolute hoot to sing, challenging enough to keep you on your toes, but the eight-part texture gives enormous pleasure.  Our orchestral colleagues powered through the work’s many over-the-top fanfares with requisite brassiness and pomp.

Eugene Albulescu, the LU Philharmonic’s conductor, spent the past semester on sabbatical and returned to collaborate with Greg (who was covering his time off as a visiting conductor) in Mozart’s charming Piano Concerto No. 21.  Eugene improvised the cadenzas, which went in interesting, varying directions over the two nights (he elicited a chuckle at a zesty quote of Mozart’s Rondo alla Turca, last night).  In a post-concert phone conversation on Friday night, Greg mentioned how much he admires Eugene’s pianism -his touch is the envy of anyone who hears him, muscular, for sure, but also full of sparkle and the ability to deliver enormous dynamic contrast.  His light and lightning fast scales are astonishing in their clarity and dynamism.  It was a lot of fun to witness Greg’s interactions with the orchestra and Eugene without the added obligation of singing.

We had an excellent quartet of soloists, and the esteem between all of the different constituencies on the stage for one another was deeply affirming.  We had full houses for both nights, and the audience seemed very appreciative.  I hope the orchestra players and the young singers had some sense of the life-changing potential of this kind of collaboration.  We always thrill when youth accomplish great things on the athletic field or when they’re immersed in a musical theatre production.  Grappling with one (or, in the case of this concert, three) of the great works of the canon can provide incredible artistic and spiritual nourishment, and can be a portal to greater individual intellectual and artistic depth.  Hearing the LU Phil blaze through the hair-raising Dies Irae as we intoned that timeless, fiery text, was one of the biggest thrills of this year, thus far, and I’m so delighted to have had the opportunity.