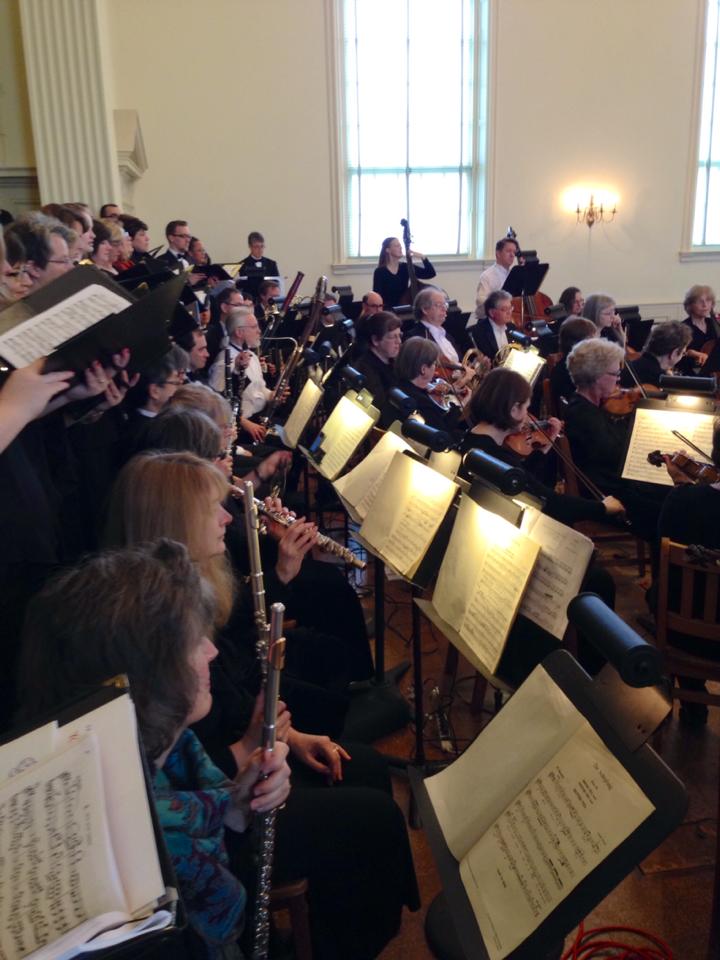 Your intrepid blogger has been rather busy of late – apologies for the lateness of this post.  It’s been almost a week since The Choir’s big date with Papa Haydn, and we continue to revel in the afterglow.  The Creation is a piece of which I’ve been aware for years, and I’ve done an excerpt  (the ubiquitous, though deservedly so, The Heavens are Telling) from the oratorio with my church choir for years.  As we learned the choral parts, which, after a steady diet of Bach, aren’t too terribly hard, I my interest in the piece grew.  It reached its zenith during the orchestral rehearsals with the soloists.  The almost peerlessly dynamic text painting, the whimsy and charm, and the sheer dramatic thrust of the work can’t help but win over even the most agnostic listener.  On the challenging heels of the Young Meister Bach, I must confess, it was nice perform a piece that tends more toward the comfort side of the comfort/challenge matrix.  That’s not at all to give the work short shrift – it’s beyond brilliant, and I now know why it holds such a treasured spot in the repertory.  Many years ago, Phil Metzger reviewed our 2003 performance of the Mozart C-Minor Mass and opined that the effect singing Mozart had on The Choir was akin to being let out to play on a spring day.  Papa’s oratorio had a similar effect.

It also helped that the case for The Creation was made so eloquently by our peerless soloists, our fabulous orchestra, and, perhaps most of all, by our conductor.  Kendra Colton performs classical period repertoire flawlessly, but also with a great deal of charm and whimsy.  Ben Butterfield sang heroically, with great panache, but also great drama.  Dashon Burton sang a performance that will add to the depth of feeling when we all say, “We knew him when!”  Our young Adam and Eve, Trevor Sands and Ellen McAteer, delighted with polish and promise – we can’t wait to see and hear more from them in the future!  The Bach Festival Orchestra owned the score and played with fire, precision, passion, and technical mastery – it was a treat to see them play on a spring day as well!  And, of course, Greg Funfgeld, in a long-coming reprise of his choral/orchestral debut (it was the first such piece he conducted as a young Westminster Choir College grad, in the late 70s), was an eloquent advocate for the piece’s power and charm.  He conducted beautifully, and his vision for the piece animated a performance of which we’re all very proud.  Phil Metzger describes the performance in this very positive review.  The performance was recorded by the great John Baker, and you can listen to a broadcast on Friday, April 25th, beginning at 8 pm on WWFM.  We’ll remind our Facebook friends in advance.

Looking forward, we have Tuesday’s Bach at Noon, including a Mozart Horn Concerto with our fearless principal horn, Anthony Cecere, as soloist, and the second half of the Coronation Mass, which I previewed in an earlier post.  It promises to be a wonderful afternoon of music which may be titled, just this once, “Mozart at Noon!”

Also, there remains the little matter of the 107th Bethlehem Bach Festival in what’s been a marvelous season.  As always, the musical bounty will be an embarrassment of riches – incredible cantatas (including a nod to our friend Daniel Lichti, who celebrates the 40th anniversary of his professional debut this year), Young Meister Bach, engaging lectures and talks by scholars Michael Marissen and Larry Lipkis, lutenists Ron McFarlanne and William Simms in the Saal of the Moravian Museum, and the Mass in B-Minor.  This winter was rough – if you’re in need of some springtime healing, you could hardly do better than our annual rite of spring!  I’ll be posting more in the coming weeks – stay tuned!