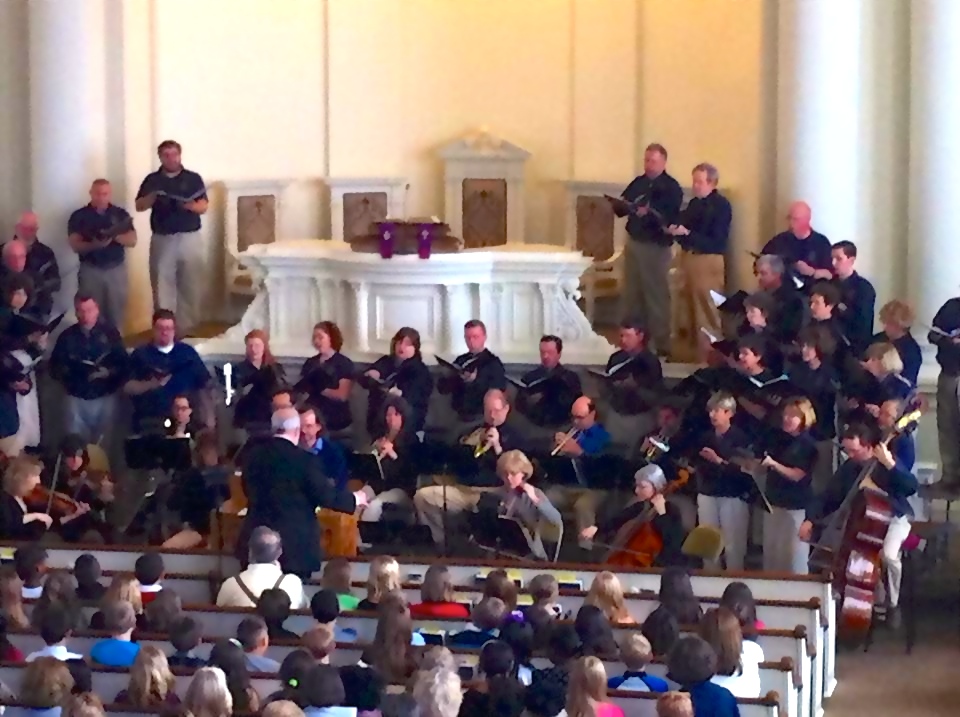 What a glorious afternoon, as well as a smashing way to conclude this year’s Bach at Noon series!  This year, we explored the confluence of Bach and Mozart with masterful and tantalizing programming by our esteemed conductor, Greg Funfgeld.  It was a study in contrasts, to be sure: a cosmopolitan wonder (who, nevertheless, died a pauper), and Kapellmeister, whose renown was only bestowed in the wider world long after his death.  But, in these two markedly different men, we also hear similarities – they shared a healthy disrespect for church authorities, and found great inspiration in the creeds and languages of their faiths.  It’s been such a treat to flesh out some of the tensions between two towering geniuses over the course of the season, and to ponder and experience both the contrast and similarity.

Today was less of a study of contrast, as the repertoire for this afternoon’s performance was exclusively Mozart.  Tony Cecere, our extremely accomplished principal horn, was on hand for a Mozart concerto.  He gave an extremely engaging introduction to the piece, discussing its provenance, as well as a little bit of biography of the composer and the individual for whom the horn concertos were written, and then played with an exceptional combination of elegance, panache, and bravado.  Our performance of the second half of the Coronation Mass was remarkably fun, and it was a treat to hear some of my colleagues in The Choir do some solo and quartet work.  Beth Allen-Gardner took the soprano solo in the Credo and and was the soprano for the quartet in the same, and sang as beautifully as ever: with a lovely tone and excellent command.  Her colleagues in the quartet also made lovely contributions:  Jennifer Brown Laubach offered a plush and regal alto sound, Kurt Anchorstar sang a lovely and lyrical tenor, and David Umla laid an excellent foundation with his trademarked flawlessness and vigor (I’m extremely lucky sit next to him for most rehearsals).  Shannon Aloise, sang the soprano solo at the beginning of the Agnus Dei (music that was later reworked into the Marriage of Figaro) just so beautifully, and also sang the soprano part in the quartet for the Dona Nobis Pacem.  I should also mention that both Shannon and Jennifer are new to The Choir, this year, and we look forward to their continued contributions to our sound in years to come!  Our colleagues in the orchestra, as always, sounded fantastic, and it was a wonderfully celebratory way to conclude a season of Bach at Noon.

We had well over a hundred school children in the audience for this performance, and I want to congratulate both Tony and, as always, Greg, for their excellent and engaging introductions to the music for today’s performance.  The children, students of The Choir’s Laura Welkey (who provided the picture above from the gallery) and Kurt Anchorstar, were impeccably behaved, and quite attentive.  It’s such a pleasure to share this music with the next generation.

The Choir now sets its sights exclusively on the 107th Bethlehem Bach Festival for the coming weeks of rehearsal. We’ve been slowly and carefully learning the billion (or it seems like it) notes of melismatic bliss found in Cantata 19, and it’s been a delight to review the other repertoire.  I’ll be writing about all of that soon. Stay tuned for more reflection on the upcoming festival, and order your tickets now!  You won’t want to miss these performances of some of Bach’s absolute best music!