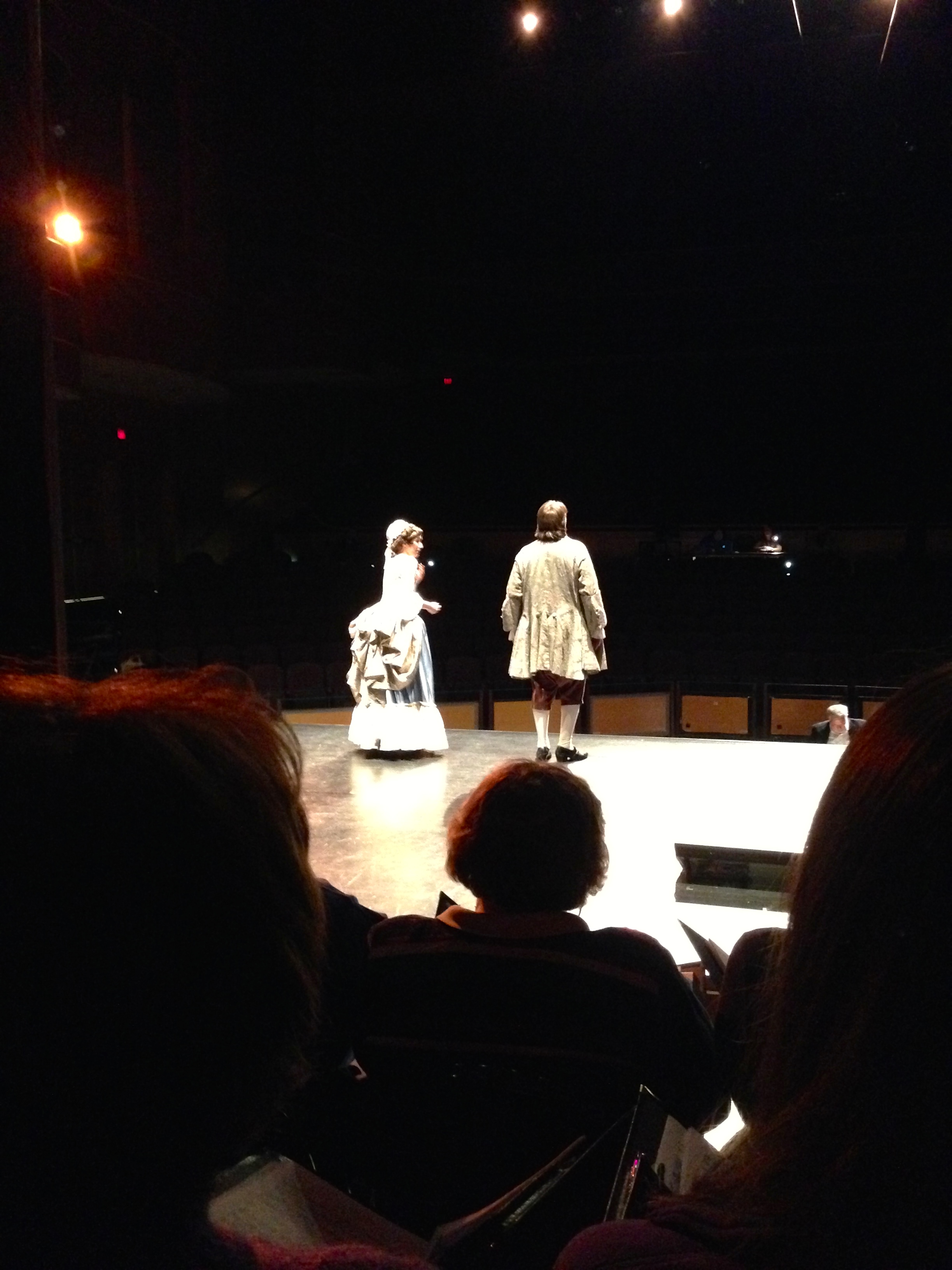 Above, a shot from the choir of Maria Barbara and Young Meister Bach.  Your intrepid blogger took this photo at some risk, and may have inadvertently aroused some gentle ire from our director, Christopher Schorr (whose staging is brilliant, and whose spirit is generous)!  We had two complete run-throughs of the opera this evening, with the performance making huge gains with each passing moment.  The more I see and hear how everything is coming together, the greater my admiration for our composer, Chuck Holdeman, and our librettist, Bill Bly.  It’s a really good time, and should have rewards for audience members of all ages and concert-going experience.  For the newbies, the story itself, and the inventive staging, replete with high drama, will surely engage.  For opera fans, there’s some marvelous solo and ensemble singing from our soloists and a small ensemble from The Choir.  For seasoned Bachians, the challenge and delight will be to listen carefully for the multiplicity of allusions to Bach compositions.  I suspect many in the audience tomorrow will take advantage of the additional opportunities to see the opera again at the Festival in May.

It’s very apparent that Chuck’s experience as our principal bassoonist has allowed decades of music-making in the Bach Festival Orchestra to seep into his compositional being, and, with every listen, I find more to marvel at in the way he incorporates themes from all over the Bach canon (with other nods to as wide a variety of composers from Joplin to Bernstein).  I also can’t help but chuckle the way he’s cast himself as a sort of leitmotif for Geyersbach, Bach’s principal adversary in the opera.  One hears faint wisps of the insane (in the best sense) bassoon part in Cantata 150, which, according to suppositions of several scholars and conductors, might have been written to tweak Geyersbach.  The part is virtuosic, and nothing like it really appears elsewhere in Bach’s corpus.  There’s also brilliantly inventive writing for all sections of the orchestra, and quotes of the E-Major Violin Partita, the rhapsodically beautiful aria from the center of Cantata 82 (the title of which is cleverly included in the libretto, elsewhere), Jesu, Joy of Man’s Desiring, from Cantata 147, which is fashioned into an early Bach compositional sketch and then is developed into a basso continuo part.  These allusions abound, and will reward thoughtful listeners with their musical sparkle.

Please join us – the doors will open at 2:30, and there will be plenty of general admission seats available – Zoellner is a big hall!  I think the world premiere of a new opera is a grand occasion, and I think everyone’s in for a wonderful afternoon of discovery, delight, and quite a lot of fun!