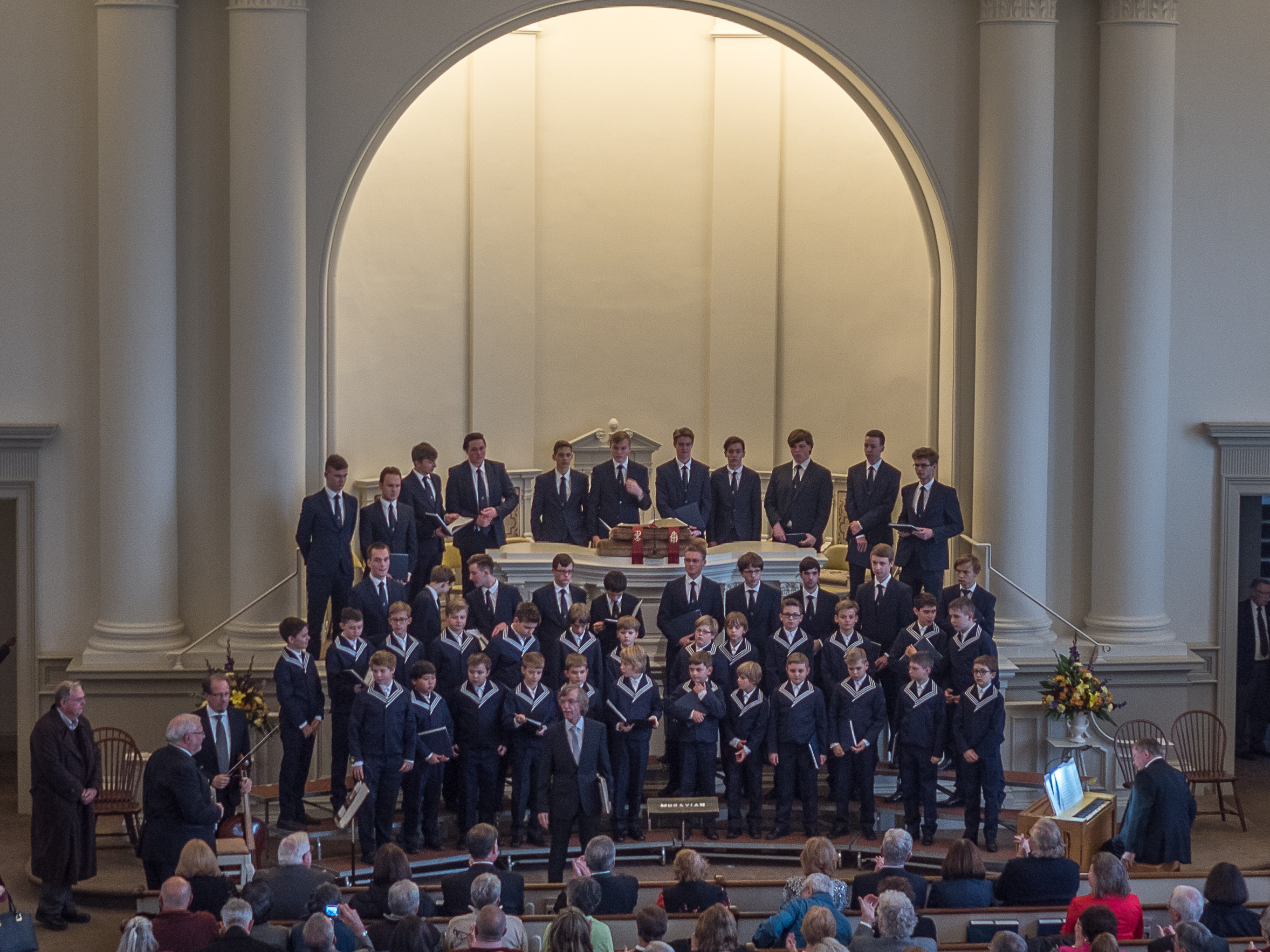 I’m just back from a celebratory dinner following this afternoon’s triumphant performance by the Thomanerchor Leipzig, the choir of boys and young men from St. Thomas Church, in Leipzig (which was, for 27 years, under the direction of our beloved J.S. Bach).  Bach frequently complained to his superiors at the church about the number of singers, their abilities, and the myriad of indignities inherent in the profession, but I can only imagine his delight in hearing the current iteration of this 805-year-old choir.

When we saw them march in at the beginning of the concert, I thought to myself, “My, this is a young group.”  As I said in my preview, I’m no stranger to choirs incorporating young singers, and we make the pilgrimage to Manhattan at least once a year to hear the peerless (at least on these shores) men and boys choir at St. Thomas Church, Fifth Avenue, but the ten to eighteen-year-old singers of the Thomanerchor looked very green (maybe I’m just growing older).  They burst into Heinrich Schütz’s antiphonal setting of the 100th Psalm, and suddenly everyone in the audience was spellbound by the shimmering, colorful, earthy, and visceral quality of their singing.  I counted 48 names in the program, which is definitely a not insubstantially sized group, but also not enormous.  I also had wondered how the favorable but slightly-dry acoustics would affect their tone and their group sound, particularly with a capacity audience.  The answer came within the first few seconds: theirs was a lapel-grabbing immediacy that filled the room with waves of opulent sound.  Given their young age, it would be unfair to expect mature men’s voices and impact, but the older boys had color and presence for miles, to say nothing of the collective musicality of the group, which was simply astounding.

Last year, Roomful of Teeth, our Gala artists, showed us the outer limits of what is possible with the human voice, which was absolutely thrilling.  This year, we returned to a heaping wallop of the German choral tradition, from Schütz to Mendelssohn, and it was every bit as thrilling.  I shouldn’t be surprised at the level of accomplishment – recent recordings from the Thomaskirche have demonstrated an astonishing level of virtuosity from the 805-year-old group.  But, that’s on recordings, when many takes are available to artists, not to mention what is possible in editing.  In person, in an exceptionally demanding program, the Thomaner were as steady as a rock, with no appreciable fatigue as they tackled challenging works of up to 8-part divisi.

We were treated to three Bach motets, interspersed with works by Schütz, Schein, and Mendelssohn.  Each of the three was rendered with exceptional sensitivity, marvelous phrasing, and enormous accuracy.  When the counterpoint would come to a rest with cadential chords, the intonation was spot-on, every time (this worked to their special advantage in the thick textures of the Mendelssohn).  Occasional the sopranos would have to rest on long tones, high in their range, and they did so without the faintest strain, just tall, overtone-rich sonorities.  Occasionally in the second motet, Komm Jesu, Komm there was especially challenging melismatic writing, and the young trebles responded with sinuous singing of such distinction.

For brief interludes, individual singers and a couple of pairs of duetters offered their colleagues a little rest, and an opportunity to take the musical spotlight.  All sang so beautifully. The final work was Bach’s infectiously ebullient motet, Der Geist hilft, a true virtuoso romp.  Gotthold Schwarz, the Thomaskantor, began with a very ambitious tempo, and the young men responded with the steely determination, effortless competence, and visceral excitement of a Porsche.  The piece concludes with two Hallelujahs, and I couldn’t help but feel that word expressed the wonderment and awe that we who were privileged to hear them must have been feeling.  I chatted with several audience members on our way back out into the cold, but magical Bethlehem evening, and we all agreed that this was a treat of the highest magnitude for all of us.  Bravo!

11/13 UPDATE:  Figures are in from the swanky benefactors’ dinner and auction that followed the performance, at the Saucon Valley Country Club, and the evening was a staggering success.  Many thanks to all of the munificent folks who supported The Choir at this event, which will benefit our always-ambitious educational outreach efforts.  Your generosity is humbling and deeply appreciated!