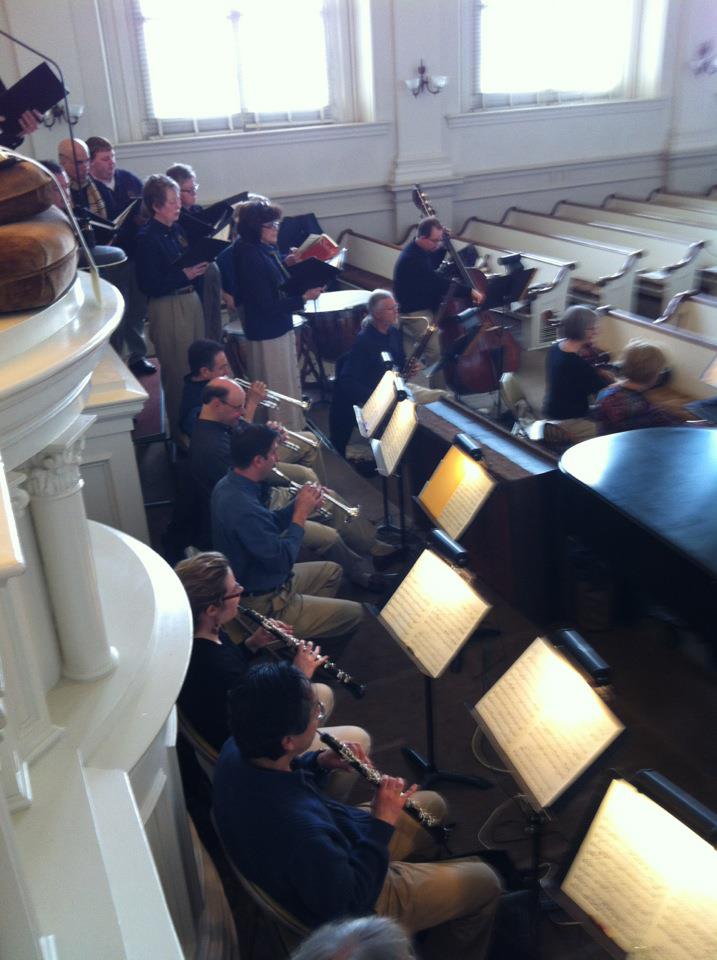 We had a near-capacity turnout for our last Bach at Noon of the season, and it was a barn-burner.  First, Greg Funfgeld and Loretta O’Sullivan treated the audience to a beautiful Beethoven cello sonata, played with their characteristic panache and elan.  The music was quite lovely, and an excellent musical mirror of the glorious day outside.  Forthwith, I shall begin a campaign for them to visit the Brahms sonatas in the coming years.

I described my first experience hearing the orchestral accompaniment to Cantata No. 130 in my last post.  As I walked in this morning, our colleagues in the orchestra were playing the instrumental prelude, and it was as thrilling as ever.  Likewise was the performance – this is definitely some white-knuckle music, so full of vigor and zest.  Our fantastic trumpets played impeccably in the bass aria (baritone Dashon Burton was fantastic in his second Bethlehem appearance) – one could definitely hear the wag of the dragon’s tail, but also the triumph of the angels depicted in this exciting aria.  Rosa Lamoreaux and Robert Petillo acquitted themselves marvelously on their recitatives and aria, as did Robin Kani on her flute obligato.  It was very rewarding to have the audience join us for the last verse of the closing chorale, with Bach’s marvelous plenum of trumpets crowning the music.

Some years ago, when The Choir was doing the work of endowing the Bach at Noon series, choir members past and present were challenged to endow one of the concerts ourselves.  Many of us responded to that challenge, and a large amount of money was given from the singers to do just that.  It was very gratifying to be reminded of that in the program, and to think of that living legacy of beautiful music, a gift from The Choir, to  our beloved audience.  What a wonderful way to cap a season of Bach at Noon concerts!

I expect to be busy in the next few weeks, writing about the upcoming 2012 Bethlehem Bach Festival.  The Choir’s been hard at work on our repertoire for the festival, and much exciting music and revelry is on tap.  Please stay tuned!