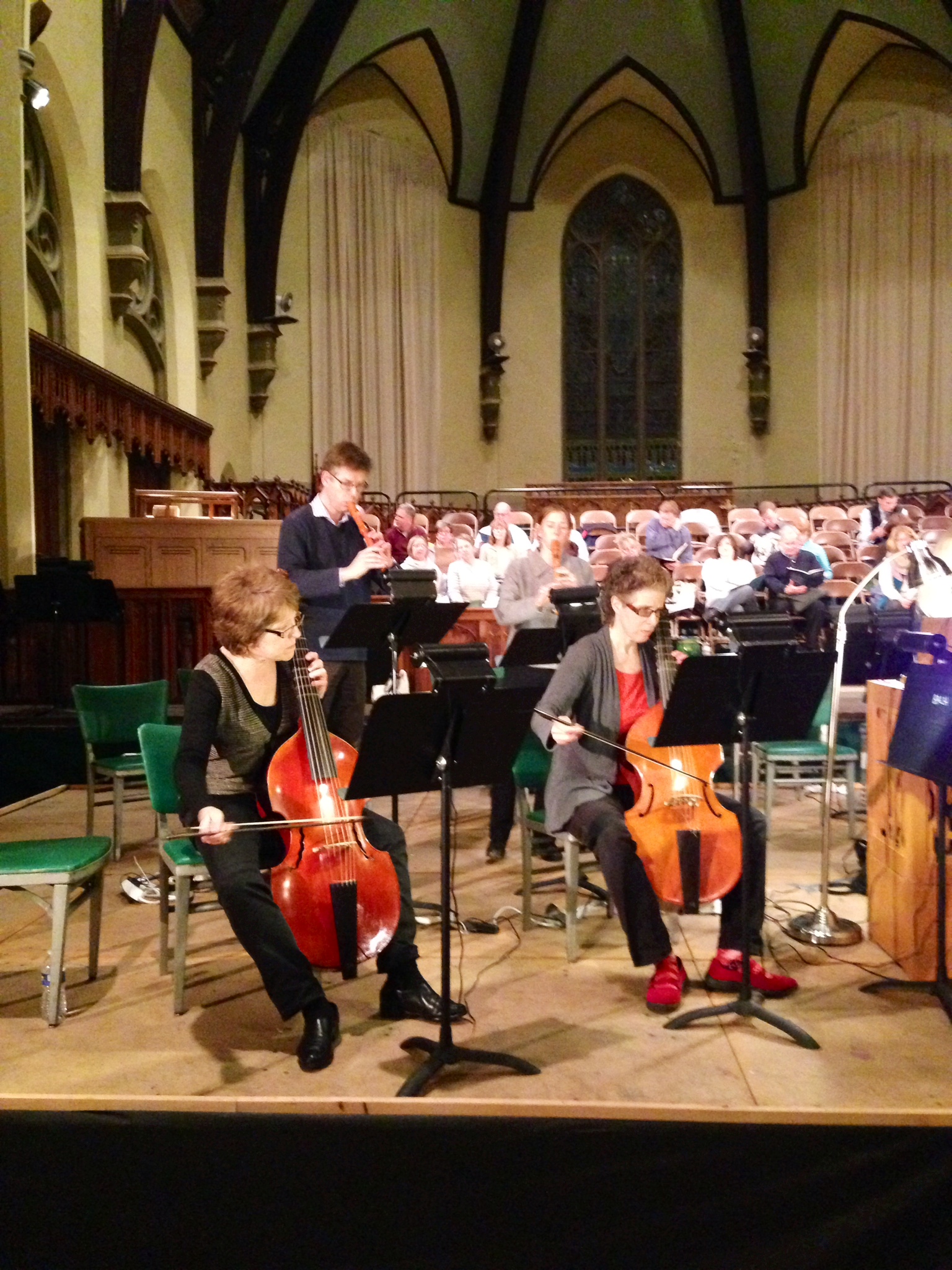 Above are our excellent gambists and recorder players, playing the opening sonata from Cantata 106.  The gut strings of the gambas have a richness and resonance that harkens to another age, as does the pure, rossignol-like tone of the recorders.  Tonight’s rehearsal was for the reduced forces for the Friday afternoon concerts.  Even with a small group of singers, we had to be careful not to oversing, leading musical credence to the pretty much undeniable theories of recent Bach scholarship which suggest that he made use of much smaller performing forces than those to which we’re accustomed.  That having been said, historical accuracy is a bit of a moving target, particularly among an institution with a performing tradition like ours. We continue to benefit from the latest scholarship about Bach performance practice, and many of our instrumentalists are equally at home on period and modern instruments.   An insightful critic from Leipzig once suggested that Bach would’ve been delighted to know that a large choir from Pennsylvania is dedicated to his work.  All that said, it is fun and revealing to hear this music with smaller forces.  The orchestra is also reduced for Cantata 71, and there’s a transparency and clarity in the textures of that work with the smaller forces.  As always, Mary Watt, my personal oboe hero, is playing her obbligato in 71 with stunning musicality, entering end exiting the fray with incredible sensitivity and lyricism.  Likewise, the string players sound especially wonderful in this repertoire.

Our rehearsal of No. 106 was quite moving, especially with the addition of the soloists.  Bach’s spare textures, and the pastiche of moving texts from all around the bible remind me both of the Brahms Requiem, in which Brahms made his own, personal selection of texts, rather than hewing to the Latin Requiem rite.  Bach does so similarly, here, and what seems somewhat like a kind of stream of consciousness linkage among texts on the page comes vividly to life, something like a Malick film. The framing and composition of each movement is so complete and riveting.  Of particular note is Danny Taylor’s singing of the “In deine Hände” text – “into your hands I commend my spirit.”  Then, later, as Bill Sharp sings “Today you will be with me in paradise,” Agnes Zsigovics and Dan offer the most devout cantus firmus singing of Luther’s paraphrase of the Song of Simeon.  Also, Agnes’ singing of the “Ja, komm, Herr Jesu,” section is stunning.  If the notion of hearing three theologically deep cantatas on Friday seems kind of heavy, I assure you, there are so many grace-filled and aesthetically arresting moments, that you’re quite likely to leave buoyed by the totality of Bach’s deeply humane sense of empathy.

I can also guarantee that you’ll definitely leave with a spring in your step after the Friday evening program.  We finished our work on that last night, and it was a thrill (and less of a scare) to sing through the opening chorus of No. 19.  It’s ready to go, as are all of the movements of the mass, and the ecstatic praise of Cantata 34 is still ringing in my ears, a day later.  Tomorrow night, The Choir descends upon Zoellner to bring Young Meister Bach back to life.