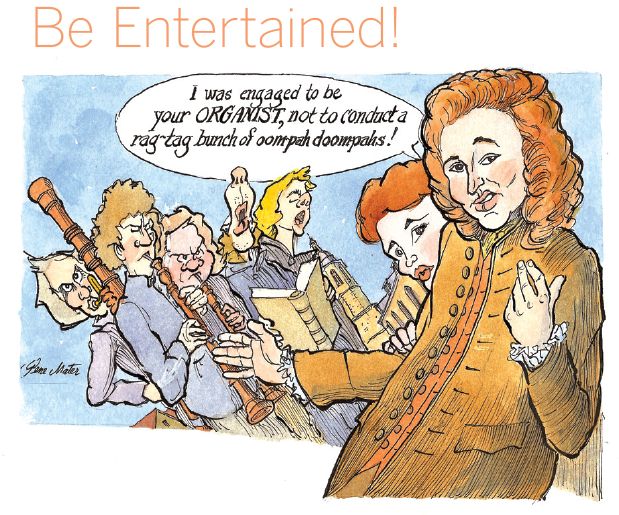 We’re about to reach the culmination of several years’ work with this Saturday’s world premiere of Young Meister Bach, a comic opera composed by the Bach Festival Orchestra’s very own principal bassoonist, Chuck Holdeman, with the libretto by Bill Bly, a tenor in The Choir.  Steve Siegel has penned an extremely insightful introduction to the work for the Morning Call – I encourage you to read it, and I heartily encourage you to purchase tickets, while there’s still time, for Saturday’s performance.

The audience will be given an introduction to opera by our own kapellmeister, Greg Funfgeld, which will set the tone perfectly for an hour of love, drama, fiercely inventive music, and an amusing and age-appropriate story of discomfort with authority.  Chuck describes his musical language as Neo-Bach, and I definitely hear the influences of Bach, as well as other 20th century composers comfortable with the language of counterpoint like Hindemith and Stravinsky (with nods along the way to Debussy and Russian Orthodox choral music, at least to my ear!).  The choral parts are quite tricky, and it’s been a fun challenge to get Chuck’s demanding yet tuneful notes in our voices, and I understand that the continuo part of Tom Goeman, our peerless keyboard artist, will be quite challenging and flashy.

One facet of the work that I find amusing is how Chuck incorporates The Choir as sort of a Greek chorus, at times commenting, at times taking part in the narrative.  In a nod to Bach’s passions, we occasionally act as a turba chorus,  with Chuck fracturing or fragmenting the melody over and through several voice parts.  It’s tricky, musically, but should be very impactful, and full of good humor.  One of Bach’s superiors’ frequent gripes about his performance was his use of harmonizations and modulations that confused his congregations.  Chuck and Bill make mention of this in the opening chorus (which fuses Chuck’s Neo-Bachian musical language with whiffs of ragtime – almost like the Swingle Singers as arranged by Paul Hindemith), with a speedy and direct modulation.  It flies by rather quickly, but illustrates the text perfectly: a delightful inside joke.

For the libretto, Bill write several poetic elements of text, and the two also used a collection of writings by and about Bach, The Bach Reader, by Hans T. David and Arthur Mendel.  If you’ve never encountered old J.S. in high dudgeon about the circumstances of his employment in writing, you’re missing out on another, slightly dubious facet of his art: his alacrity with the complaint letter.  In fact, it’s a skill so exuberantly honed over the years of his life, that a psychologist, in a recent documentary about Bach’s life by the English conductor, John Eliot Gardiner, was just about ready to diagnose Bach, posthumously, with narcissistic personality disorder, with perhaps a side helping of a persecution complex (speaking from experience, a lifetime of working for the church as a musician can present certain challenges to one’s psyche and emotional well-being!).  Chuck and Bill pick up on that defiant and perhaps petulant strain of Bach’s personality in a way that surely makes him relatable to the young (or young at heart), and adds greatly to the humor of the proceedings.

Of all the things I blog about for The Choir, the Family Concert is the trickiest to preview, because several disparate elements come together rather quickly, usually on the day of the concert (I also missed last night’s rehearsal with the soloists due to a stomach bug).  I encourage you to read Steve Siegel’s article, and stay tuned to the blog.  I’ll update after the two rehearsals leading up to Saturday.  In the meantime, make sure you’ve booked your tickets, and be sure to invite all the children you know to the performance.  It’s going to be a wonderful time!