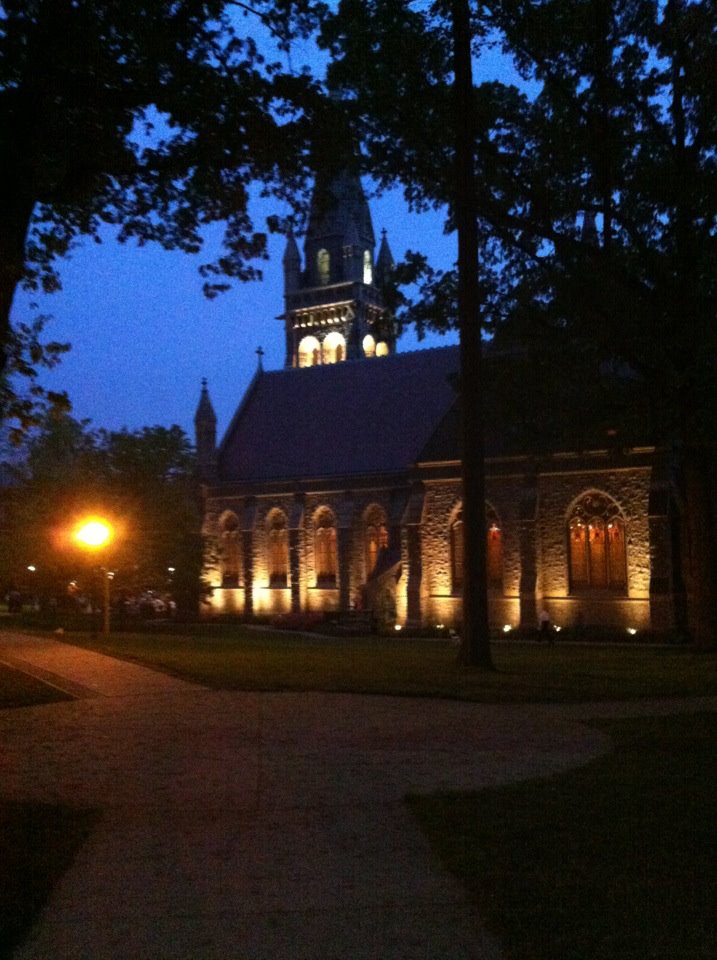 “I feel like I’m in a stained glass window, surrounded by all these beautiful sounds!”  Those were the words of a first-time Festival attendee with whom I had the pleasure of dining tonight.  Hear, hear!  It was a glorious day of music-making, and and so much more is on tap tomorrow!

We began the afternoon with Nicholas Kenyon’s Distinguished Scholar Lecture.  To a very-full black box theatre in the Zoellner Arts Center, Sir Nicholas offered a talk that was full of erudition, insight, and great wit (there was uproarious laughter on several occasions).   I sincerely commend his talk to those attending next week, or those who might have missed it this week.  He describes himself as an enthusiast, and his enthusiasm for the subject is infectious.  If you attended, you’ll be primed for a great series of concerts to follow.

The horns were both raucous and majestic in Cantata No. 79, and our wonderful band of soloists (both instrumental and vocal) offered splendid singing and playing.  It was a great delight to welcome Daniel Lichti back to the Festival after a few years away.  I remember once hearing his voice described as mahogany – how very apt!  Daniel Taylor offered a beautiful rendering of Cantata N0. 170, with able assistance from the Bach Festival Orchestra.  Particular kudos to Tom Goeman for his excellent organ obligato playing.  We concluded with Cantata No. 4, with beautiful duetting by Agnes Zsigovics and Daniel Taylor and, later, Agnes and Benjamin Butterfield.

After a break for dinner, we returned for a spirited Cantata No. 80, with especially fierce playing by our colleagues in the orchestra.  This was followed by a piece with which I was not familiar, the Plaudite, sonat Tuba of Johann Joseph Fux.  Ben Butterfield sang beautifully, and we were treated to the excellent trumpeting of Larry Wright, with more-than-able support from the orchestra.  We concluded the concert with Cantata No. 21.  I certainly don’t wish to minimize anyone’s contributions, and hope I can be forgiven for thinking that this cantata belonged to Mary Watt, our achingly-accomplished principal oboe.  She played the opening sinfonia so incredibly beautifully, gave obligato support during the opening chorus, and then continued with the haunting aria, Seufzer, Tränen, Kummer, Not.  She was joined by Charlotte Mattax-Moersch on continuo organ, Loretta O’Sullivan, cello, and Rosa Lamoreaux, soprano.  Rosa and Mary made equally stunning contributions, and it’s hard to overstate how transfixing their performance was.  The rest of the cantata was lovingly rendered, with eloquent solos, the burnished trombones, and an ecstatic final chorus.  It was fabulous to be involved in such a rewarding series of performances, and I’m very eager for tomorrow.

We were the subject of a wonderful article in the Lehigh Alumni Bulletin, definitely worth a read.  Alice Gast, the President of Lehigh University, offered some reflections on our 100 year-long association with the University in this article in the Easton Express Times.  Melinda Rizzo also penned a preview for the Express Times.