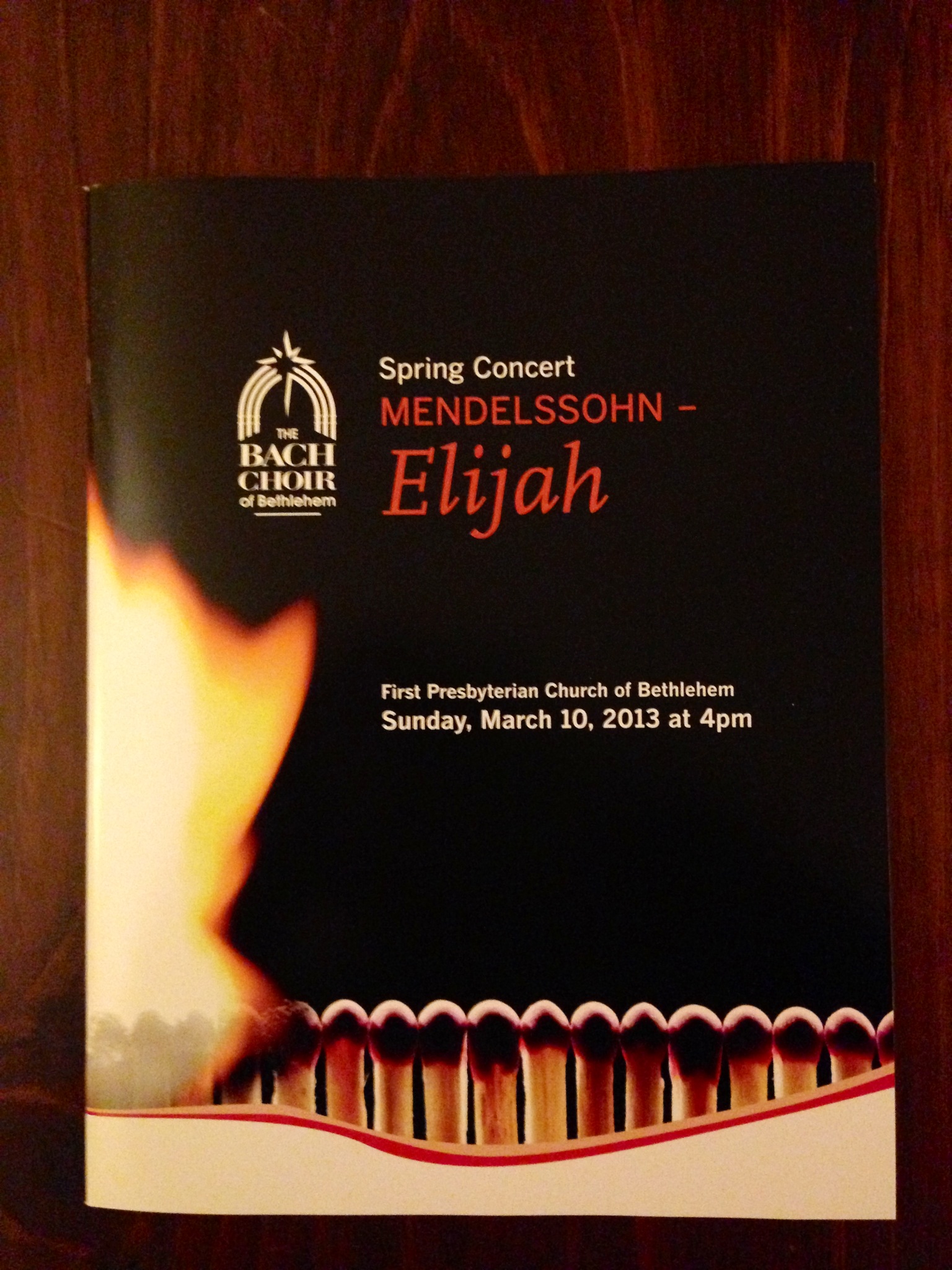 I’ve had the opportunity to reflect on today’s performance over dinner and a couple well-deserved (I think) glasses of wine, and, the more I ponder it, the more I’m certain that it was an amazing experience.  To be sure, the audience was very generous in their applause and involvement, and it was really gratifying to have sold all the tickets that were available. Likewise, a second performance of a piece like Elijah allows things to gel a little more, for the combined choirs to become more acclimated to singing together, for the orchestral players to find that common voice, and for the soloists to build upon the foundation so lovingly laid over an intense period of rehearsal and performance.

Elijah was born into a world that greatly valued the communal aspect of of music-making, and, indeed, of choral singing.  As the estimable Robin Leaver notes in our program annotations, in the 19th century, performances of Elijah were common, even ubiquitous (even as they expressed varying levels of musical accomplishment).  It is heartening to think that, however we might cringe at the thought of the sounds of the lesser of these ensembles, a wide swath of people nevertheless shared in the experience of making this music, which, by its very nature, sweeps us away. I wish more people could share in that.  As a musician, it seems increasingly rare that individuals come together to bring such a work to life, and certainly rarer still to have 150 musicians commit to the difficult work involved in making it happen.  That said, we gladly do, for  it offers us a rare opportunity for transcendence, while stretching our musical, intellectual, and spiritual selves.  When we sing of fiery, fiery chariots, with fiery, fiery horses, I can almost imagine the CGI version of this – perhaps in the context of an epic film, with Peter Jackson at the helm.  Mendelssohn is so very evocative that our imaginations are stirred.  His genius is that much more secured by the fact that such images were not part of his cultural zeitgeist.  Perhaps in paintings, or in opera sets, but Elijah conjures such a vivid and compelling world of sound, that I hardly think you need any technological intervention to have this world brought before your very eyes, thanks to Mendelssohn’s vivid imagination and, if you’re listening carefully, your own, as well.

What’s rewarding, then, is the idea that our large, merry band of musicians can coalesce around such an enterprise, and we have an engaged and enthusiastic audience with whom to share this music, and, for a few hours this afternoon, we, collectively, could share in an experience of dramatic, musical, and spiritual richness – one that I doubt we’ll soon forget.   And the best part, at least for the musicians, is that we’ll be able to continue to polish and richen our understanding of the piece for one last performance at Strathmore. Thank you to everyone involved in making this afternoon’s concert such a memorable experience.  I’m thinking that I’ll live-blog from Strathmore, so stay tuned!

Monday Update: Safe to say that the critic from the Morning Call, Steve Siegel, liked the performance.