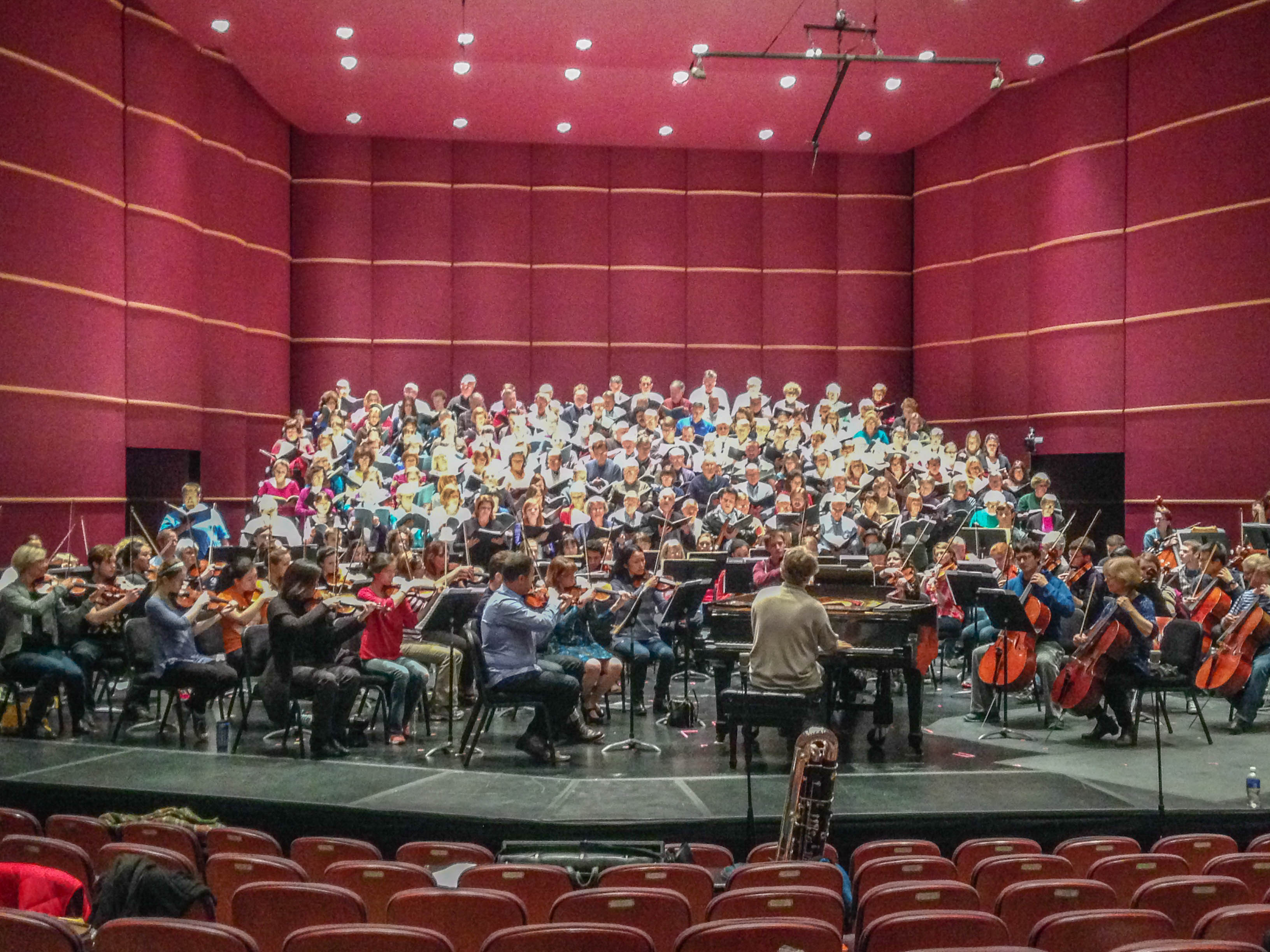 It’s been a while since our last blog update, and much has happened in the intervening time!  Things are moving along beautifully for The Choir:  we’re on the heels of an excellent Spring Concert collaboration with the Lehigh University Philharmonic, the Chancel Choir of the First Presbyterian Church of Bethlehem, and the choir of the Cathedral Church of the Nativity, in celebration of Lehigh University’s Sesquicentennial. The repertoire included Stravinsky’s Symphony of Psalms, the Beethoven Choral Fantasy, and Mozart’s charming arrangement of Händel’s masterful setting of John Dryden’s Ode to Saint Cecilia.   The LU Phil’s conductor, Eugene Albulescu, and Greg shared conducting duties, which also included Eugene conducting from the piano for the Beethoven.

Eugene conducted the Stravinsky masterfully – a daunting task with mixed meters and all of Igor’s usual rhythmic and technical snares.  I thought the orchestra approached this challenging work with the necessary (and possibly warring impulses) of humility and bravado, particularly since the students were in the midst of an exams week, as well. Many moons ago, as a college singer full of hubris, I did not adequately prepare for an audition on the second movement for a performance with the LA Philharmonic and Esa-Pekka Salonen, and crashed and burned (my consolation was, instead, to sing in a performance of the Saint John Passion with Helmuth Rilling, but still…)! This score is not for the faint of heart or the ill-prepared.  My long-overdue redemption came this past weekend, and it was a thrill.  I also got to stand near the piano players (the score calls for two), and, like many of their colleagues, they’d obviously worked really hard on the especially challenging passages.  It was a pleasure to sing for Eugene, who has an excellent and nurturing rapport with his students, and who had an wonderful concept of the piece.  I hope we’ll get to sing it again sometime.

Eugene also led the Beethoven, combining his conducting panache with his remarkable faculties as a pianist.  I thought he captured the improvisatory nature of the prologue beautifully and marveled at his speed, musicality, and precision.  If you know the piece, you know it’s a musical bon-bon, a precursor to the Ninth Symphony, full of wit, charm, piano pyrotechnics, and, as it’s missing some of the darkness of the earlier movements of the 9, it brims over with a less-manic version of Beethoven’s infectious joie d’vivre.  Eugene played with abandon, and I think we all responded with vigor and joy.

Finally, the podium was handed over (most graciously, I should add – Eugene was kind and effusive in his spoken introduction of our conductor) to Greg for the Händel.  Our excellent soloists included Ben Butterfield, who evocatively sang the opening recitative, and the lovely soprano, Laura Heimes, who sang rhapsodically beautifully on the difficult arias (with excellent instrumental support from both the student musicians, and our own Loretta O’Sullivan).  I don’t think student orchestras experience much Mozart-inflected Händel, and the Lehigh players adopted period style beautifully and played with much cheerful energy.  Reflecting on the experience, a colleague underlined that sense of youthful enthusiasm as one of the lasting impressions of the concerts.  I wholeheartedly agree.  It was also a pleasure to see Greg work with the young players with efficiency and grace (we’d expect nothing less, of course).  A lot was accomplished in precious little time, and a hearty tip of the hat to everyone involved in bringing about this delightful and affirming week of music-making.

Members of The Choir also offered a performance of Cantata BWV 4, Christ lag in todesbanden, yesterday for the final Bach at Noon of the year.  I wasn’t able to attend, but understand it was a delightful performance to a packed house.  As a treat, Tom Goeman performed several Bach chorale preludes pertaining to Easter, a most excellent prelude to the cantata.

Next up:  the reimagined Festival!  I will be posting regularly as we approach those two hallowed weekends in May.  There will be cherished traditions and some innovation as we gather at Lehigh for the 108th Bethlehem Bach Festival.  There’s much rich fare on offer, and I’m anticipating a jolly good time!  Please check back here often!

PS.  As always, Steve Siegel has an excellent and insightful review of the performance here.