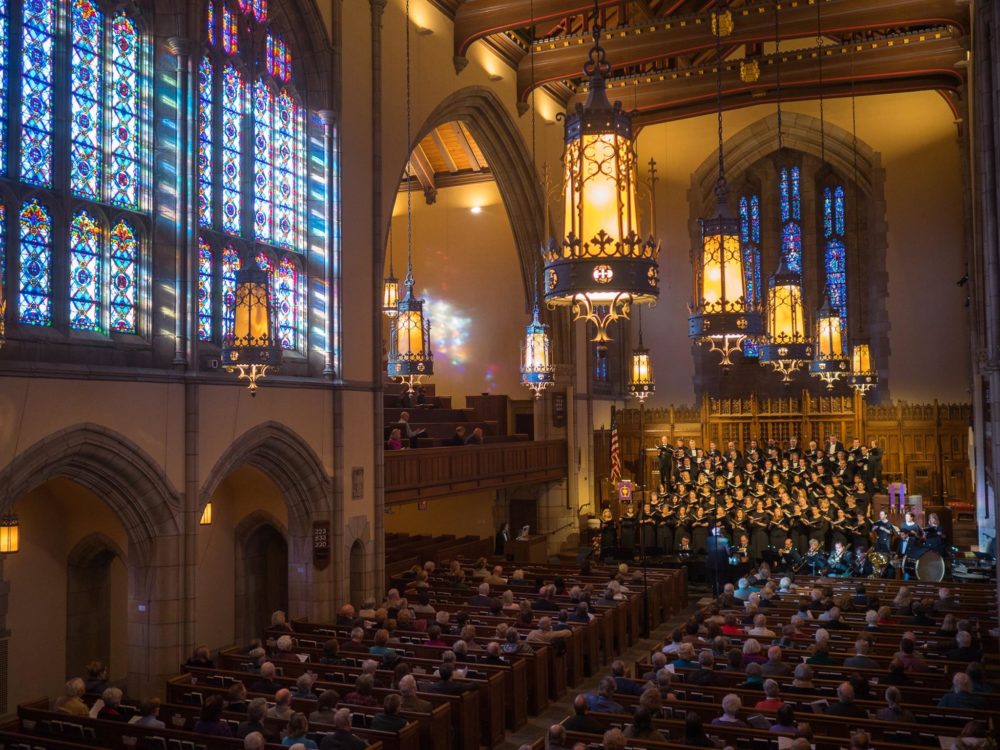 Our two-concert run of Walton, Lauridsen, Bach, and Rutter is now a happy memory, and what a wonderful celebration it was!  Excitement was high for both venues:  it was so lovely to join the august list of performers who have graced the state of the State Theatre in Eason.  Shelley Brown, the theatre’s CEO and President gave us a wonderfully warm welcome, and the staff there was also kind and looked after am extensive checklist of details  Singing in such a venue is a little different from the churches that are our bread and butter, not least of which because of the acoustics, but also because, once the house lights went down, we couldn’t see our audience!  That said, I think we all felt an immediate connection with those who came to see and hear us, and they were very generous with the applause.  Our brass players acquitted themselves very well, and Tom Goeman provided stunning accompanying work from both piano and organ.  Greg Funfgeld conducted with staggering attention to detail, shaping musical phrases, diction, all while shifting through the constant meter changes and moods of this repertoire.  I had the opportunity to listen to assembled performing forces from the hall during rehearsal, and though the space isn’t reverberant, the singers’ voices carried beautifully.

Sunday’s performance had a different character in the live acoustics of Bryn Mawr Presbyterian Church, but much was the same.  We received another warm welcome, this time from Jeffrey Brillhart, the church’s legendary music director (who conducted a program the previous evening with Philadelphia’s Singing City choir).  The audience was also very appreciative, and there was a fantastic sense of camaraderie among members of The Choir.  See the video on The Choir’s Facebook page of the last few minutes of the Rutter to hear how things sounded in the room – it was thrilling.

There’s always a mix of emotions on the day after a program such as this.  I think everyone shares a sense of accomplishment, maybe a little relief that the time demands from the weekend are over, but both of those facets are also suffused with a little melancholy.  We have to say goodbye to three of the four works (we sing the Bach motet every few years) for a while.  There were such energy and enthusiasm about this repertoire, and the rewards of singing it were lavish.  It had been a twenty-two year span between the last time I sang the Lauridsen and this weekend  – I hope it won’t be so long, next time.  The last few weeks of preparations have felt particularly vital, and the spirit among the singers seemed especially animated.  One of the many blessings of singing in community is the depth that musicians of differing backgrounds can bring to the same piece of music.  Hearing the range of emotions demanded by this repertoire in the talented voices of my colleagues is life-affirming and uplifting.  Hopefully, it is similarly nourishing for the audience.

I’m sure we will carry that spirit forward into our next assignments, for the 111th Bethlehem Bach Festival.  We’re revisiting several beloved works for Festival this year, including the Actus Tragicus, Händel’s sign-inducing wonder, the Ode to Saint Cecilia, and Bach’s early yet epic cantata, Ich hatte viel Bekümmernis. She-e Wu will be on hand to demonstrate her mallet percussion pyrotechnics (and extremely sensitive musicality), Greg will join his colleagues in the orchestra as a solosit on Bach’s enlivening 5th Brandenberg Concerto, we’ll have a couple of celebratory evenings at Zimmerman’s Coffee House, Charlotte Mattax-Moersh will offer the Goldberg Variations in the Saal, and so, so much more.  Now’s about the time to start ordering tickets, particularly for the performances that sell out quickly (Zimmerman, the Saal).  And don’t forget The Choir’s inviolable rite of spring:  Bach’s epic Mass in B-Minor, one of the greatest masterworks of the western canon, and one that nourishes and inspires us anew, every year.

I’ll be writing more about Festival in the coming weeks, but, in the meantime, heartfelt thanks to everyone who came out to welcome spring with us this past weekend!