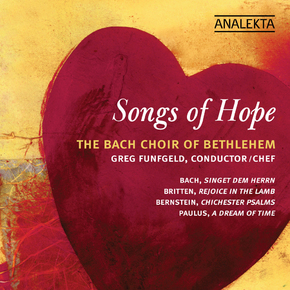 Our new recording, Songs of Hope, is now available from Amazon and from the Analekta website, and, of course, at the Bachhaus (an order form is available as part of our Fall Newsletter, too).  Steve Siegel has a nice review in the Morning Call.  I’d been listening to various edits of the recording most of the summer, and couldn’t be more pleased with the final product.  Kudos to producer Brad Michel, Greg Funfgeld, and Tom Goeman for their excellent work on the final edit. Computer technology has made editing a lot easier, but a lot of focused listening and difficult decision-making goes into preparing recordings, and Tom and Greg spent two days at Brad’s studio in Boston assembling the best possible takes, and fine-tuning and tweaking all the while.   A lot of hard work went into the recording, including hours in front of the mics for choir, instrumentalists and soloists, and our fearless leader.

I was surprised to discover that my favorite moment of the recording was one of the hardest to capture during the recording session.  It was the end of a long night of recording, and the gentlemen of The Choir were working very hard at singing this bit of text:

For this time is perceptible to man
By a remarkable stillness and serenity of soul.

Britten puts these words into rhythmic augmentation – they literally become slower on the page instead of just slowing down at the conductor’s behest.  To be blunt, it wasn’t going well, and, in the moment I was worried that we’d reached diminishing returns.  New advice was coming from Brad and Rosa Lamoreaux, who was also listening in the control room, with every take – we were oh-so-close, but not quite there yet.   After each take, there was an excruciating silence, followed by “almost….” from the control-room speaker.   Finally, after an especially long silence, we got the thumbs up from Brad and Rosa.   There was a loud, primal sigh from everyone, and it was a wrap for the night.

When you listen to that moment on the recording, it’s almost as though the text is describing the singing – there is a remarkable stillness and serenity of soul, and it reminds me of Greg’s frequent admonition (he credits the late Frauke Hasseman, choral guru, and The Choir’s former diction coach):  “Before it’s a work of art, it’s just work.”   Maybe because it was so hard won, I’m very, very proud of that moment on the recording.

I’m also very proud of our singing on the rest of the recording.  You may recall that we’ve dedicated the recording to Winnie Erdman, The Choir’s beloved deputy executive director, who died in the spring of 2010 after a courageous battle with pancreatic cancer.  Songs of Hope is now a lasting memorial to her, and that remembrance was surely a large motivation in our performances now captured forever on that recording.

In preparation for the Spring Concert and the recording, I wrote a series of essays about each of the pieces on the program, which are linked to from here, along with a YouTube of Greg discussing the repertoire.   You can preview the recording from the Analekta link above, and you can buy it at a very reasonable $17 from us.  Fans of The Choir will doubtless want this recording in their libraries