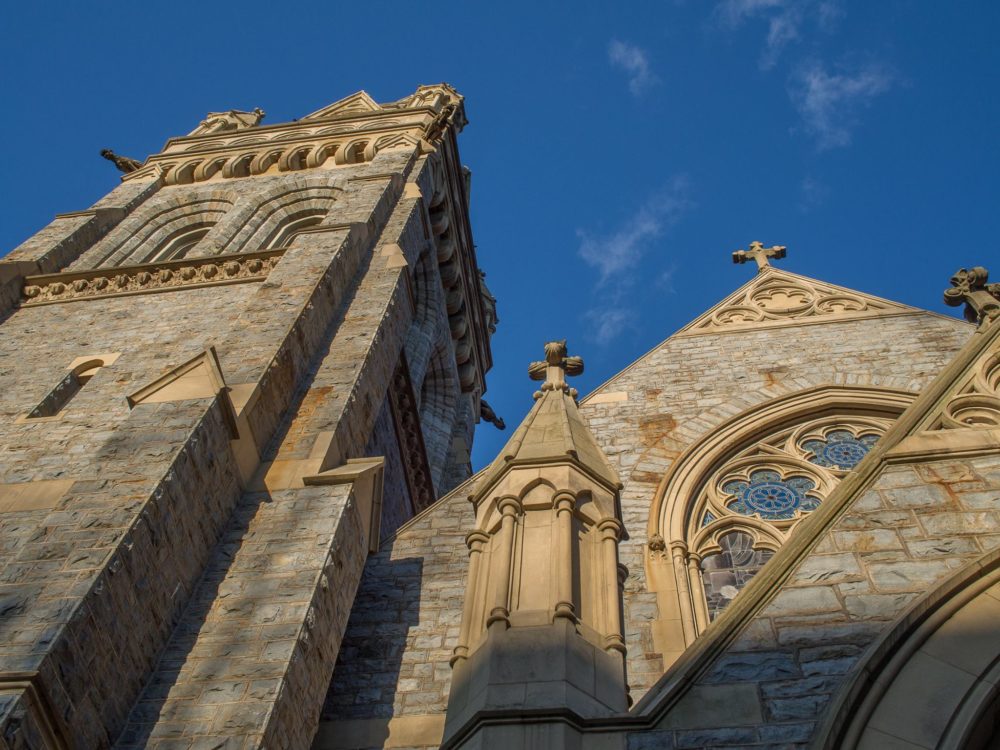 One of Bach’s earlier cantatas, Cantata No. 21, was first performed in 1714 on the Third Sunday after Trinity, during Bach’s time in Weimar.  Like many of his earlier works, despite having come from the pen of a younger and less-experienced composer, it stands on its own as one of his true masterworks.  Beginning with an opening sinfonia of surpassing beauty, one hears devout and empathetic strings offering a gripping foundation for the oboe soloist (in our performances, the heroic Mary Watt, whose sense of phrase for this work is unsurpassed).

The choral movement that follows begins with a kind of musical sigh by the choir, which repeats the word “Ich” (“I”) three times, first a chord in the key of the piece, c-minor, then the submediant, a-flat major, then in the dominant, G-major, which sets up the following choral fugue marvelously.  The choir sings many repetitions of the text “Ich hatte viel bekümmernis,” “I had much trouble in my heart.”  To my ears, this repetition, as Bach works out an elaborate fugue, with much text painting and an almost Monteverdi-esque use of dissonance and suspension, becomes like a mantra – a musical exploration of the trouble in which our hearts may find themselves.  Johann Mattheson, one of Bach’s frequent critics, pounced on the repetition, in an example of 18th-century internet trolling.  As always, the English conductor and Bach expert, John Eliot Gardiner, writes engagingly of the critical beef:

Bach’s cavalier way of ignoring poetic metre, and his propensity to allow instrumental textures to vie with, and even overwhelm, vocal melody, offered an easy target for the theorist Johann Mattheson. It was specifically his flouting of the accepted conventions of text-setting that provoked Mattheson’s ire on this occasion and led him to go for Bach’s jugular in a scathing attack on the repeated ‘Ich’s’ which precede the fugal presentation of the opening chorus. It seems strange that he should not have grasped Bach’s rhetorical purpose behind this repetition – to underline the sinner’s culpability and the slough of despond from which only God’s comfort can rescue him.

Perhaps it was less the thrice repeated ‘Ich’s that irritated Mattheson than the gratuitous repetition of whole phrases both here…Yet this is a deliberate and effective strategy: by presenting the voices in fugal succession, Bach builds up a composite portrayal of personal affliction shared out between the singers, the instrumentalists joining in only every three bars to coincide with the words ‘in meinem Herzen’ and to reinforce the mood of disquiet and heaviness of heart.

After exploring the heaviness and trouble of the afflicted heart, Bach pivots to the second line of text, “aber deine Tröstungen erquicken meine Seele,” “But your consolations revive my soul.” Here, Bach writes extremely fleet music with many melismatic passages.  In fact, at several points, all of the singers are moving in sixteenth note melismas (many notes to one syllable of text), creating the sound picture of a great spiritual enlivening.

As the work unfolds, there are beautiful arias (the third movement, in particular, is especially striking) powerful choruses, and Bach concludes with allusions to the Revelation of John (“Worthy is the Lamb”), followed by one of his jauntiest fugue themes with a miraculously melismatic countersubject.  In an early rehearsal on this piece at the beginning of the year, we finished one of the middle choruses (this piece is somewhat unusual in that it contains four significant choruses), one of my colleagues laughed through tears at how beautiful the movement we had just finished rehearsing was.  I can easily empathize with her – young Bach gives us some of his most poignant music in this cantata.  This journey from despair to devotion to cosmic joy is a frequent one on which Bach takes us,  though, in this cantata, our travel will be especially rich.  The rhapsodic praise that concludes the work makes it a perfect match with Händel’s Ode to Saint Cecilia, another work of rousing choruses and time-stopping arias (including the Bethlehem debut of the prodigiously talented soprano, Cassandra Lemoine).  With She-e Wu performing the c-major cello suite on the marimba and the Händel and Bach works on the program, followed by luminaries outside the Packer Memorial Church lighting the way to a champagne toast celebrating our 120th Anniversary and the 35th anniversary of Greg Funfgeld’s life-changingly inspired leadership, the evening promises much, much magic!