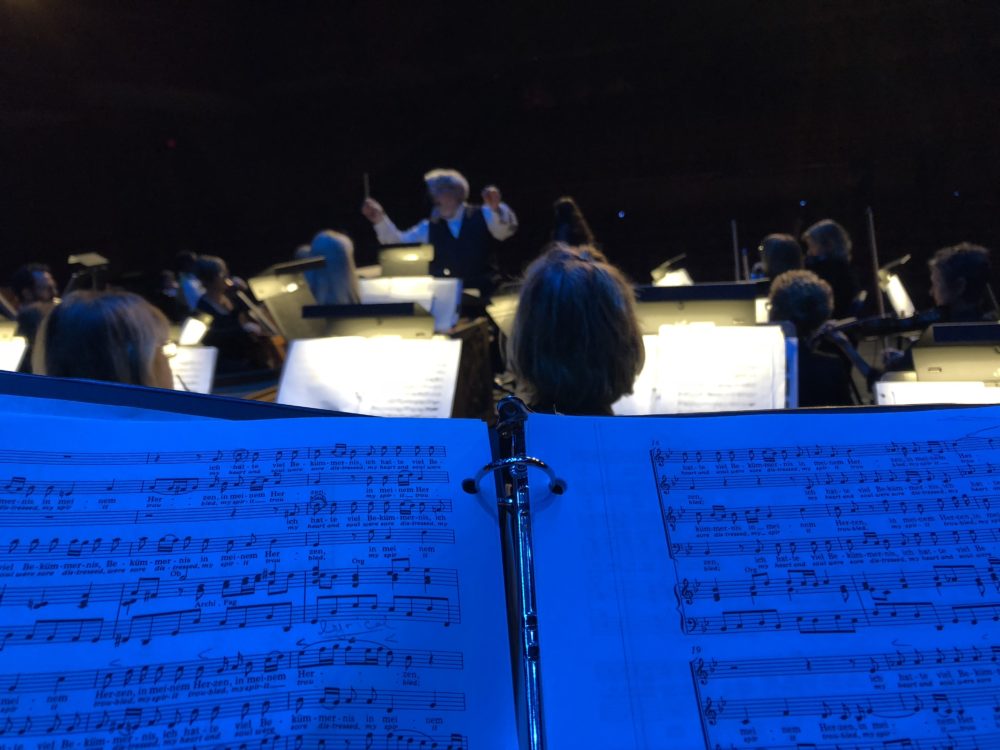 Above is the view from my perch behind the Bach Festival Orchestra for a dress rehearsal of Sunday’s marvelous Family Concert, in Baker Hall at the Zoellner Arts Center, at Lehigh University.  Kathy Lauer-Williams has an excellent review up at the LV Stage Blog.  To her insightful observations, I will add a few thoughts.

When we performed this staging ten years ago, I came away with such admiration for Susan Hammond and the Classical Kids original, for Bill George and his colleagues from Touchstone Theater, for Mark McKenna, our jaunty and beguiling JS Bach, and for the children who were his cohorts, including Emily Young (who played young Elizabeth the first time around, and who later sang with us for a year as a Choral Scholar), and for Greg Funfgeld, who more than adroitly switched roles quickly as host, conductor, and harpsichord soloist.   We’ve all matured a bit and the work has seasoned during its hiatus, and a new group of children was equally brilliant this time around.  Likewise, Mark’s Mr. Bach was as fun and instructive as before, but with new layers of depth.  The whole experience was much fun, touching in places, and full of the joy that surrounds our favorite composer.

Educational outreach is a huge facet of our mission, and Mr. Bach Comes to Call easily stands the test of time.  Bravi tutti to all involved!

Our attention now turns to the March Bach at Noon, on Tuesday, the 13th, and the Spring Concert, which we’ll offer in two exciting locations, The State Theatre in Easton and the Bryn Mawr Presbyterian Church, on the Main Line.  We have been hard at work mastering the repertoire for the latter.  It’s billed as a “choral showcase,” and that’s exactly what it promises to be, with infectiously exciting music, gobs of thrilling brass fanfares, and much spiritual and intellectual stimulation.  I’ll write more about all of that in the coming weeks.  I always say this, but these are concerts you won’t want to miss!