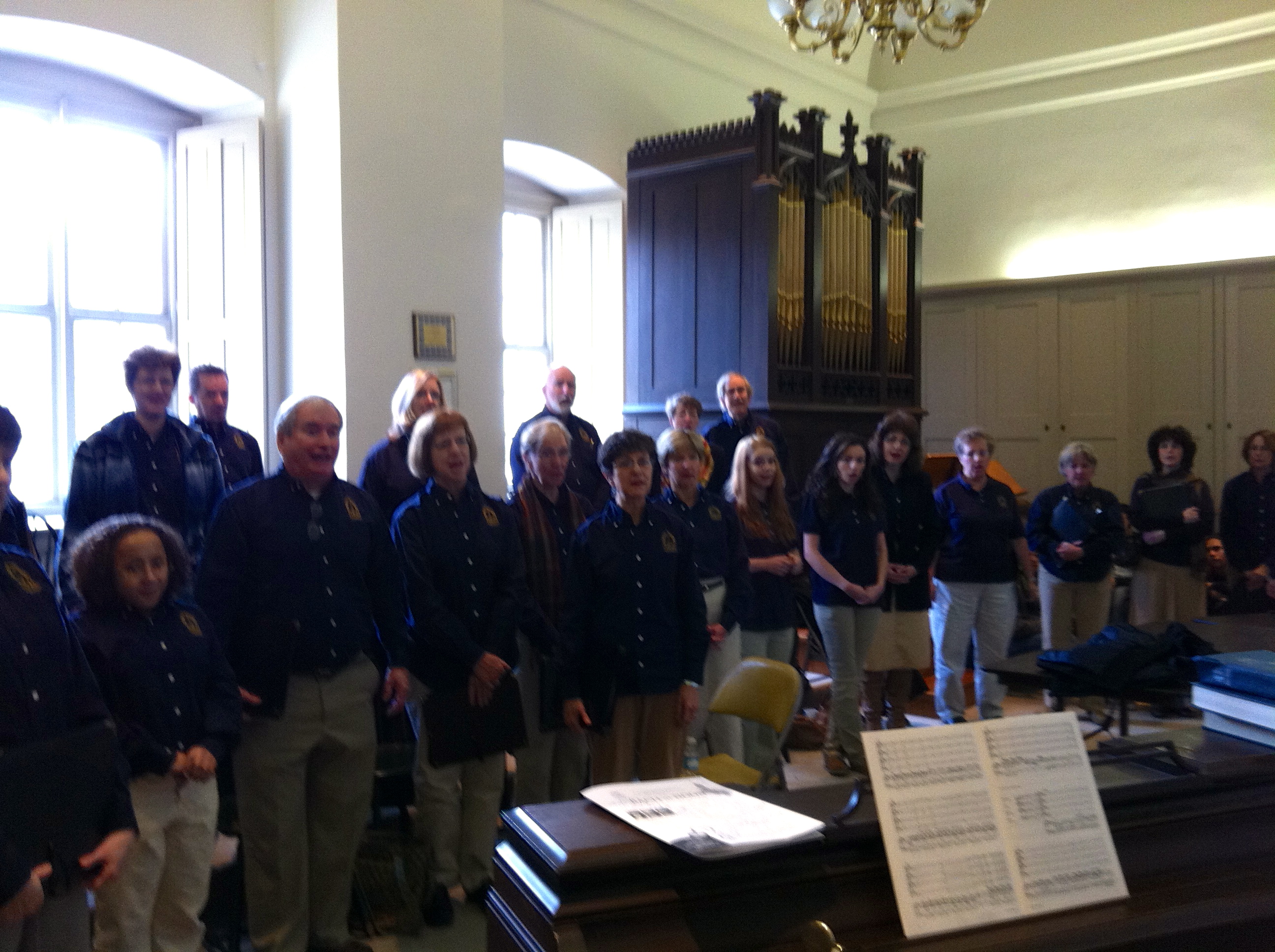 We had a capacity audience on hand for yesterday’s Bach at Noon, and it was, as predicted, a glorious way to ring in the New Year!  We were delighted to be joined by students from Moravian Academy, The Lehigh Valley Lutheran Academy, and some middle school students of one of our sopranos, Laura Wekley, from Lehighton Middle School.  All were impeccable listeners, and it was such a pleasure to share some beautiful music with them and the rest of our audience.

Tom Goeman began the program with a thrilling performance of a Bach transcription of a Vivaldi concerto.  Originally written for two violins and strings, Bach re-imagines it as an organ piece, and Tom brought the driving rhythm and colorful textures vividly to life.  I saw heads bobbing and people growing physically involved in his performance (which is as it should be – Vivaldi’s sense of motion is irresistible!).  He received a well-deserved, hearty ovation at its conclusion.

The program continued with The Choir’s performance of Vivaldi’s Gloria, RV 589.  Kudos to our orchestra – they played magnificently, and to our large band of soloists from within The Choir, itself.  Amy Ruhf (my dear wife) was joined at the last minute by Lynn Long, who was substituting for a Choral Scholar who had fallen ill.  They two sang the Laudamus beautifully (I’m slightly biased, I know), and congratulations to Lynn for sing with aplomb in challenging circumstances.  Jessica Floray, one of our Choral Scholars and a senior at the LV Charter School for the Performing Arts, sounded elegant and assured on her aria, the Domine Deus.  She was joined by Nobuo Kitagawa, oboe, who played magnificently, as always.  Another Choral Scholar, Jacqui Hamati, a senior at Emmaus High School, joined Loretta O’Sullivan, cello, and The Choir for a rapt and beautiful Domine Deus, Agnus Dei.  Choir member Jennifer Marriaga then tackled the fierce and challenging Qui Sedes as a last-minute substitute for another ailing choir member.  Jennifer sang beautifully and with great courage!

The personnel for this performance was intended to showcase the Choral Scholars program, which is an opportunity for high school seniors to join The Choir for a year, and experience music-making and artistry on extremely high levels.  Many of our Choral Scholars go on to careers in music, and others continue to make music avocationally, but with the passion and ardor that this experience reliably instills.  Unless they matriculate to a few colleges in the US with the most elite choral programs, a year with Bach is likely to surpass the quality of their undergraduate musical experiences, something about which we’re very proud.  I could not imagine singing the repertoire we perform as a high school senior, and these experiences are a wonderful entree to the highest echelons of the choral universe.  I spoke with several audience members following the concert who were thrilled to hear those young singers who have survived the various maladies circulating in the dog days of winter!  We continue to have best wishes for speedy recoveries for those who were unable to sing, and are full of gratitude for the singers who cheerfully and competently stepped in at the last minute!

In other news, our recording of the St. John Passion was reviewed in a recent issue of Gramaphone, and the critic had very favorable things to say about Bach in Bethlehem.  Gramaphone has a fairly opaque firewall for sharing their reviews online, so I’m unable to share the contents of the review, but it was quite admiring!  Congrats to everyone involved in that effort, which continues to reverberate in our memories, years later!

Finally, The Choir has begun working on repertoire for our Family Concert, swiftly approaching on January 27th.  We’re passionate about sharing music with individuals of all ages, and would love to see a full house at the Zoellner Arts Center of Lehigh University.  I’ll be posting more about this concert soon, but mark it on your calendars, and bring your children/grandchildren/nieces/nephews/young children of your neighbors, etc.  It’s going to be  wonderful time!