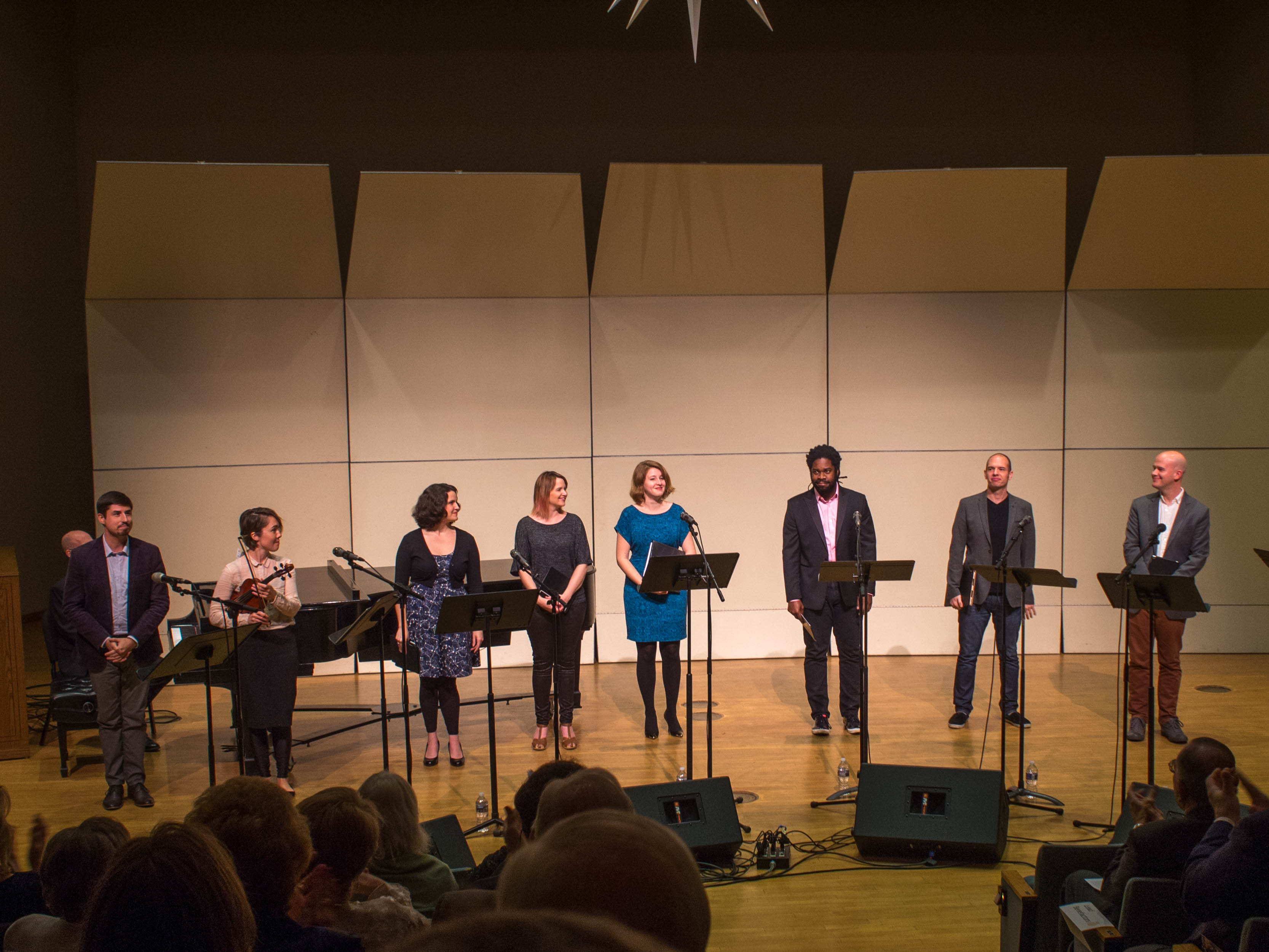 Imagine if the most quotidian sounds in your day, say, a sigh, were suddenly to morph into the most amazing, angelic music. A breath becomes the seed for intense counterpoint.  Further, imagine the alchemy present that a proper, well-voiced major chord, sung with an integrity of vowel color that would be the envy of any British choir, were to suddenly mutate into the kind of belting you’d more likely hear in the hills of Appalachia.  Chords fragment, fractalize, really, breaking into constituent parts only to transform into a kind of diaphanous harmonic neverland, when, suddenly from the gauze, they reconstitute, ever-evolving, with a kaleidoscopic sense of textural and chameleonic invention.  Imagine, too, that this challenging and sophisticated music-making was offered with incandescent energy, a refreshing lack of self-seriousness, and enormous charm.  Imagine an audience experiencing this style of music, quite likely for the first time, and generous ovations of hearty applause, and more than a few hoots and hollers, and you’ll have some sense of what it was like to experience A Roomful of Teeth at the 2016 Gala Concert.

Their performance began with two arias offered by the group as a kind of bridge to their usual repertoire.  Estelí Gomez sang a lovely version of the first movement of Bach’s Cantata No. 51, and Dashon Burton sang the powerful arioso from the St. John Passion that he offered to great effect last March in our Spring Concert.  He was accompanied by Caroline Shaw on viola, with his colleagues singing the chorale obligato devoutly in the background.  Two eloquent and elegant performances, very much in our comfort zone.  So far, so familiar.

Then Caroline spoke about her Partita for 8 Voices, the one that was awarded a Pulitzer for composition, and the group’s recording of the same earned a Grammy.  She spoke of the inspiration of Baroque dance forms, but also warned that those were points of departure for the Partita, which is written in a style that is very much of the moment, and let it be said, the moment very much seems to be her moment.   The ensemble then blew the roof off of the place, in a bravura performance, full of passion, demonstrating the outer limits of vocal production and expression.  I was curious to see how the audience would react to music that inhabits a sound world to which I suspect most of us were unaccustomed.  Baffled wonderment might be one description.  The ovation that followed was beyond appreciative, perhaps approaching awestruck.  At intermission, I had the opportunity to speak with audience members from several generations and levels of exposure, and everyone was just rapt with excitement and appreciation.

The second half continued with compositions that further demonstrated the range and depth of vocal colors achievable by the group, which included elements of (brace yourself): Tuvan throat singing, belting, yodeling, Inuit throat singing, Korean, Georgian, and Sardinian singing, Hindustani, Persian classical singing, death metal, and screamo, all of which the members of the group have studied with exemplars of each style.  Eric Dudley and the group’s founder and artistic director, Brad Wells, were both represented in the repertoire on the second half.  Their works were deeply compelling, expertly crafted, and showcased the exceptionally diverse skills of each of the singers, as well as the dexterity with which they shift in styles and colors, from moment to moment, and second to second.  It was an amazing afternoon of music.

I don’t have audience statistics or figures from the dinner and auctions that followed, but there seemed to be an excellent turnout, and the dinner was a great deal of fun.  All of this benefits our award-winning educational outreach programs, a most worthy cause.  Much respect to the members of A Roomful of Teeth for a captivating musical experience that none of us will soon forget! 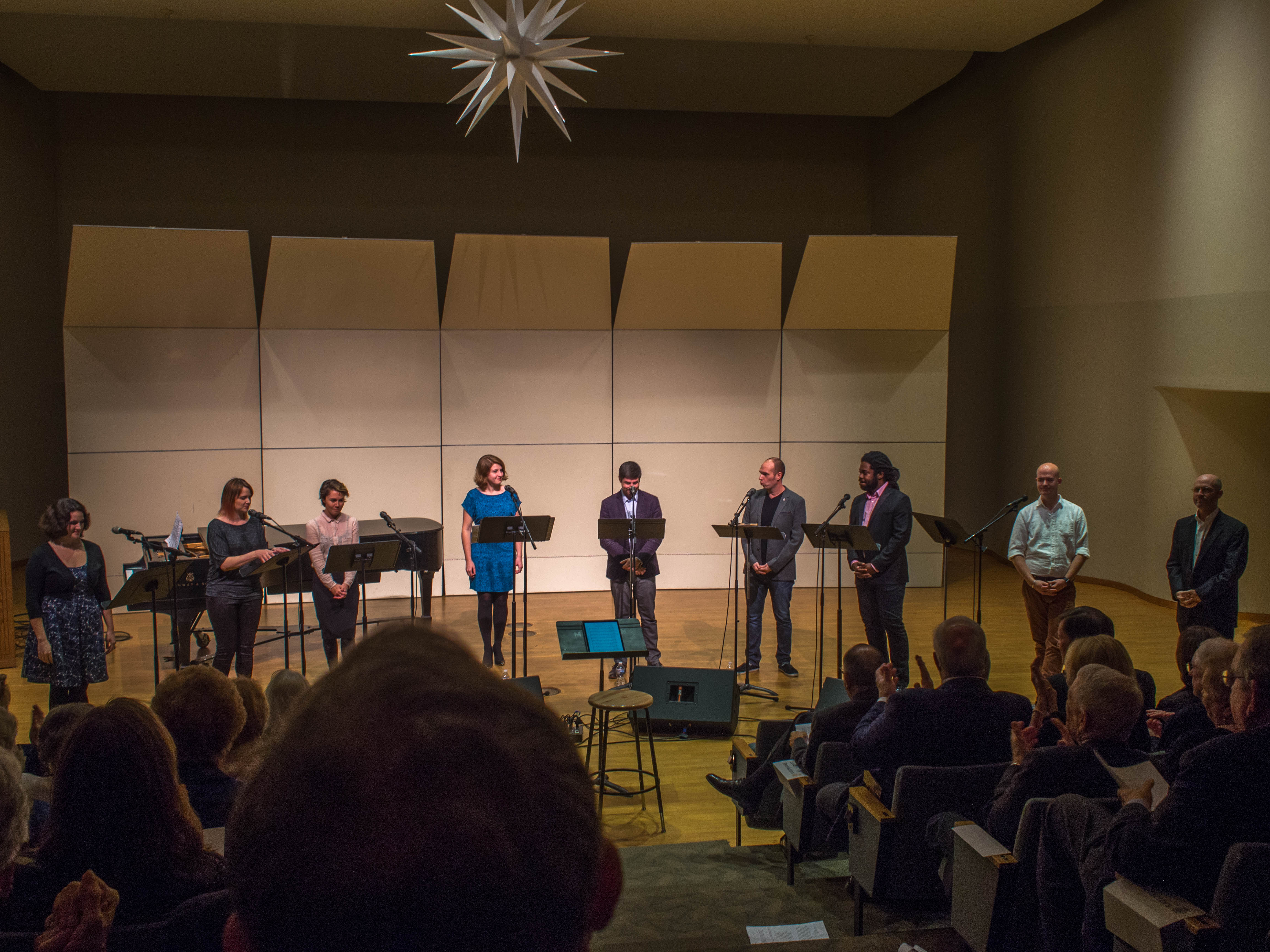