J. S. Bach program: A preview of the performance we’ll give at the Leipzig Bachfest in the glorious Thomaskirche at the Bachfest in Leipzig, Germany in June, 2020. They are part of a yearly cycle of Chorale Cantatas Bach wrote for the Leipzig churches. 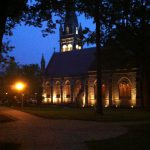 Cantata 8  Liebster Gott, wenn werd ich sterben? (Dearest God, when will my  death be?)  A stunning and curious cantata whose time-stopping opening chorus begins with the flutes chiming the funeral bells of the Thomaskirche over pizzicato strings, all as part of a stately dance. A tenor aria continues the church bells, and the work concludes with a sprightly jig for the bass soloist and a rousing concluding chorale.

Cantata 99  Bach Festival Premiere! Was Gott tut, das ist wohlgetan (What God does, that is done well) Used three times in his cantatas, it includes a gorgeous tenor aria with flute obbligato.

Cantata 130   Herr Gott, dich loben alle wir   (Lord God, we all praise you)   This cantata sets the well-known “Old Hundredth Psalm Tone,” known as the doxology in many churches over a whirling and churning accompaniment in the orchestra – some seriously white-knuckle playing.  Written for the Feast of Michael and All Angels, the evocative text includes mention of a dragon, Daniel in the lion’s den, and Elijah’s chariot.  The dragon is given particularly vivid treatment in a heroic bass aria.