This cantata was first performed in Leipzig 1728 for the feast of St. Michael. It is one of three cantatas Bach wrote for this feast in his lifetime (the others are the chorale cantata BWV 130, in 1724, and BWV 19, in 1726). Some scholars think the performance of this work may not have occurred until a year later, in September, 1729.

Given St. Michael’s position in the Christian (and Jewish) faith, the tone of this cantata should be no surprise. But the bright D major chorus, triumphant in character, using trumpets and timpani, was not entirely new – Bach adapted a chorus form the Weimar cantata BWV 208, Was mir behagt. In its previous guise, the chorus is part of a secular hunting cantata. This same movement was later adapted for yet another cantata, BWV Anh. 193, Herrscher des Himmels, König der Ehren. The choir appears only in the opening and closing movements, and in very different scorings and textures:

Except for the final movement, which sets a stanza of a chorale tune (text by Martin Schalling, tune anonymous), the cantata sets a text by Picander, one of Bach’s most important poets. There are numerous examples of “collaborations” between the two, the most notable of which is the St. Matthew Passion.

Returning to the first movement for a moment, it is hard to imagine this movement in any role other than the present. With the brilliant D major sound, trumpets, and timpani, it sets a perfect stage for either a rallying cry for battle or an anticipation of the triumph of good over evil. Furthermore, the text and choral parts (written anew for this setting, rather than recycled form BWV Anh. 193) send the clear message “Man singet mit Freuden vom Sieg” (Man sings with joy of victory). The polyphonic, imitative entrances truly are a rallying cry, with the joyous sounds rising gradually from among the ranks of angels and man alike. The most glorified word in this passage is “Freuden”, emphasized through melismas, chromaticism, and a rise to a temporary high point in the line:

The bass part, which begins this imitative passage, lacks the chromaticism, but has a far longer melisma; thus “Freuden” retains its importance in all vocal parts.

At one point, Bach even uses this orchestral passage during a longer choral statement, adding to the complexity of the texture while at the same time faintly reminding the listeners of that orchestral tune.

The five interior movements are of a smaller scale. These might be considered to be representatives of Michael in his battle with Satan – the bombast of the chorus is absent from here out. These five movements are summarized in the chart below: 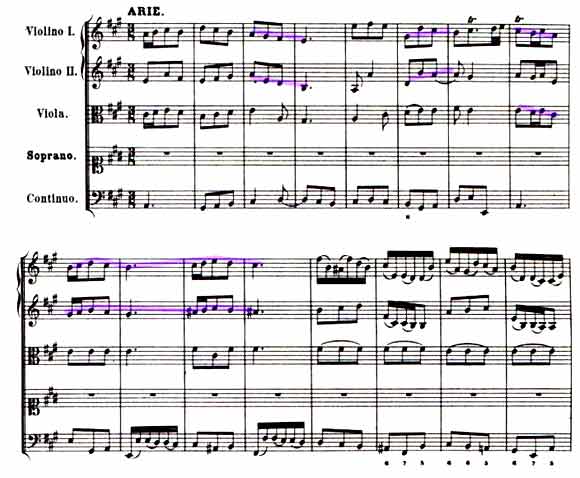 Note that the large orchestra rests throughout these movements as well, leaving the bulk of the work to the continuo instruments.

The final chorale is not nearly so simple as it appears on paper. It is a theory student’s nightmare! I’ve marked the many keys Bach establishes and implies so you can see how complicated (and generally unstable) this “simple” chorale really is! 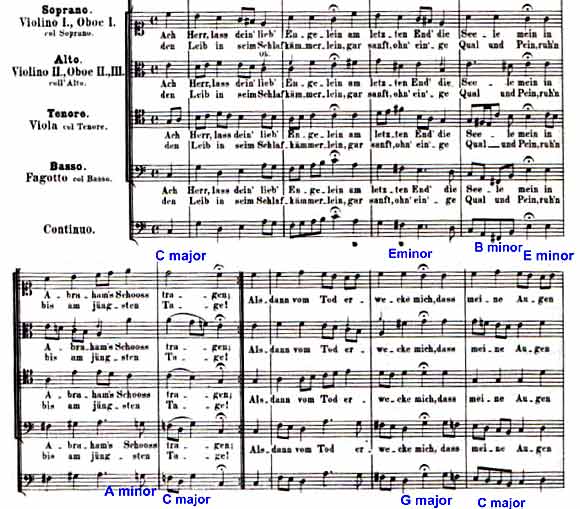 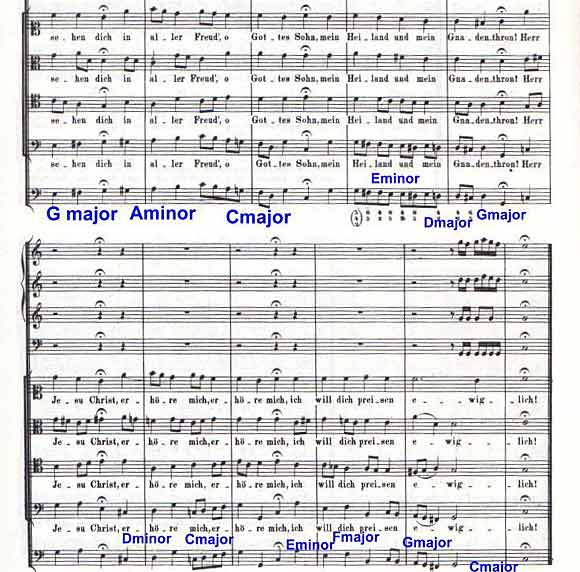