Orchestral Suite No. 4 in D major

Like the more famous third orchestral suite, the fourth suite uses oboes, trumpets, timpani, strings, and continuo, and is written in D major. This may be the least often heard of the four Bach orchestral suites, and in some ways the most adventurous. It begins – as all the orchestral suites do – with a French overture movement. Notice the occasional but very florid continuo line; Bach writes the active scalar sixteenth-note passages as “filler” for an otherwise static line. Observe how such activity merely fills the space between consecutive similar pitches or consecutive pitches a mere step away:

As the French overture proceeds into the second, faster section, note how often Bach changes the timbre by varying which instruments have the “lead” at a given time: there are portions in which the strings are distinctly the featured part of the ensemble; others where the oboes lead; and still others where the trumpets and timpani take charge. This kind of scoring in part indicates that Bach views these different instrumental combinations almost as separate ensembles or “bands” within the larger texture – something we will see more of later.

In the paired bourrées, Bach uses syncopation in numerous measures, a technique not often seen in this particular dance movement (Little & Jenne,Dance and the Music of J.S. Bach). Examples of syncopations from the Bourreé I are shown in green below. 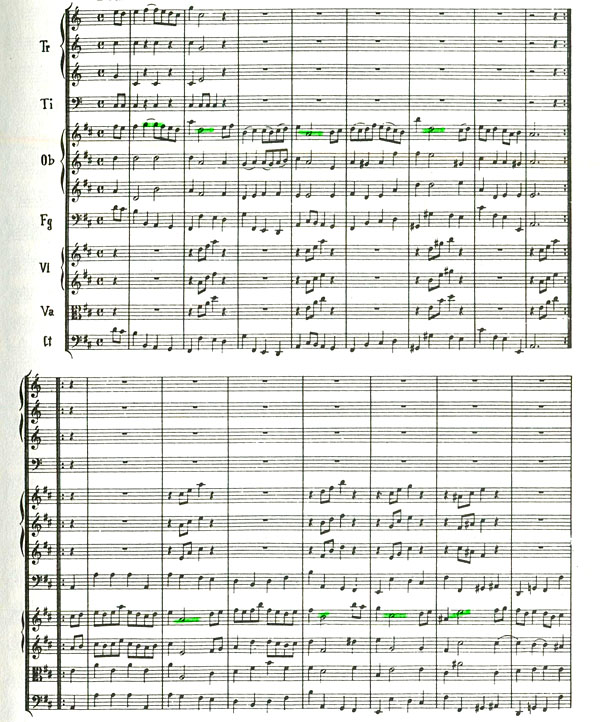 This brief example demonstrates again how Bach varies the instrumentation in blocks to create different textural and timbral effects. Notice how everyone plays at the start EXCEPT for the violins and violas; trumpets and timpani then drop out so that the oboes are featured; after the repeat sign the winds and brass are gone while the violins and violas take charge.

Bourreé II is even more unusual, with the oboes playing in long notes in rhythmic unison; rhythmically, they are doubled by the low strings while the bassoon performs the most elaborate part, playing in virtually constant eighth notes a winding part that could hardly be classified as “continuo”, though that is normally the role to which the bassoon is assigned. Trumpets and drums are silent for this movement while violins and violas perform in rhythmic unison brief undulating lines mid measure. 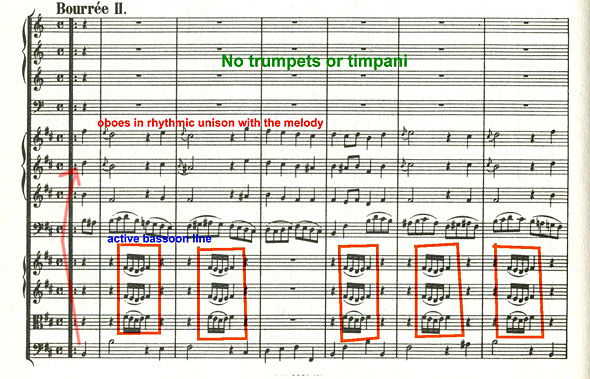 In the gavotte, Bach uses an unusual texture, combining essentially three “bands” of instruments in which none doubles the other. Like the preceding movements, the gavotte incorporates frequent syncopations from the Italian style. The character is “joyful and stately” (Little & Jenne, Dance and the Music of J.S. Bach) and the “stately-ness” is particular evidence when the gavotte is played a little slower than “normal” gavotte tempo, as is often the case (due to the complicated texture).

Minuets also feature a lot of syncopation (Little & Jenne), here in a different fashion, with the extended ornament on the second beat giving the beat extra emphasis and causing a syncopation across the third beat. The two minutes are related in that they are in the same key (D major), have a syncopation frequently on the second beat, and use similar gestures – though in Minuet I the movement is upward while in Minuet II it is downward. The difference in scoring comes across more dramatically then do the similarities between the movements.

The final movement is a réjouissance, a rare movement for Bach – in fact, this may be the only example of such a movement among Bach’s works. Though used more commonly in Telemann’s suites, the best known réjouissance is certainly that of Handel in his Fireworks Music. The movement title means rejoicing, and in fact is more reflective of character than content. There is no standard format to these movements, other than the general bright sound and quick tempo.