Orchestral Suite No. 1 in C Major

Of the four works called “Orchestral Suite” today (or “Ouverture” to Bach), the C major orchestral suite is thought to be the earliest of the four that survive. it is scored for two oboes, bassoon, strings, and continuo. This is “arguably the most conservative of the four” (Robin Stowell, “Orchestral Suites” in Oxford Composer Companions: J.S. Bach). And, perhaps, for this reason, it is less well known than the two “interior” suites, the second suite in B minor (with the famous Badinerie) and the third suite in D major (with the famous “Air for the G String”).

Stylistically, the First Suite in C major is modeled after French suites, and thus uses French stylized dance movements (French overture, courante, gavotte I & II, forlane, minuet I & II, bourreé I & II, passepied I & II). At the same time, it is similar to a concerto grosso, with the pairs of oboes often serving as a concertino. We see the concerto grosso influence in the very first movement, a French overture. Normally we do not think of solo groups in a French overture movement. But here, in the faster fugal section, there are portions clearly marked “trio” – for the oboes with their continuo support (bassoon alone) – and others marked “tutti” for the entire ensemble: 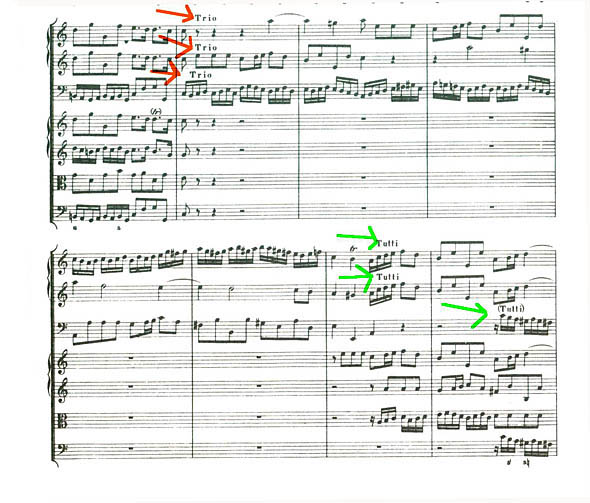 The paired gavottes provide nice timbral and textural contrasts to each other, with the first using the full ensemble throughout; this is essentially a four-part texture with oboes and first violins playing in unison, and the second violins, violas, and continuo (including bassoon) making up the other three parts, respectively. In the second gavotte, however, the oboes are featured almost as another conertino, with the strings playing a unison fanfare motive as both “filler” and counterpoint. Robin Stowell identifies this as the same fanfare idea used by Bach in the opening chorus of Cantata 70 (Stowell, “Orchestral Suites,” in Oxford Composer Companions: J.S. Bach).

Perhaps most notable among the movements is the use of the forlane, the only Italian dance among the movements, and a rare dance form for Bach. Specifically, the forlane (also called “forlana”) was popular in 18th-century Venice, and normally was a street dance including mandolins, castanets, and drums. It was, therefore, highly rhythmic. A forlane was normally in compound meter, and often in 6/8. Bach’s example is in 6/4. A forlane is often described as “lilting” because of the 6/4 or 6/8 meter, but with the quick tempo and numerous dotted rhythms, lilting is not how I would describe Bach’s forlane. The bass line is highly fragmented and repetitive, almost like an ostinato – it certainly is ostinato-like in terms of the rhythm, maintaining the same pattern in the first section until the cadence. 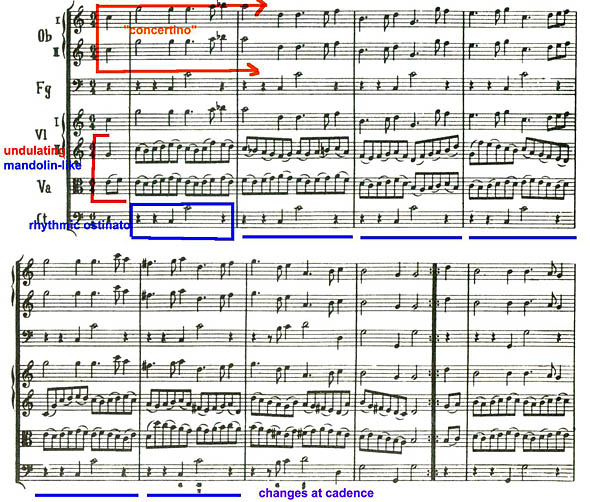 Similarly, the minuets (menuets) and bourreés also show timbral and textural contrast in their pairings by changing scoring. The first minuet uses the full orchestra, while the second is for strings only. The first bourreé is for full orchestra – like the first gavotte – using oboes and first violins in unison in what is otherwise a four-part texture. But the second bourreé employs the “concertino” alone – the two oboes with bassoon as continuo. It is a simpler texture than found elsewhere in the suite, not just because there are only three parts, but also because the two oboes frequently appear in rhythmic unison. This is also the only movement in the First Orchestral suite which is in the minor mode. (Do not be fooled by the partial key signature in the example, which shows only two flats; this is clearly in C minor, as evidenced by the use of B-naturals.)